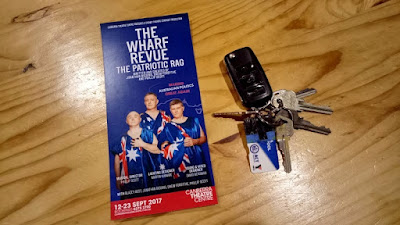 It was the Wharf Revue and the title was the Patriotic Rag and it was at the Playhouse and it was pretty full. The Wharf Revue is an institution and well received in this town, a home to the building and the institutional support of our Federal Parliament and government. The Wharfies are witty, one is a capable pianist, they sing and dance their way through lots of characters who we all recognise, some of whom look surprisingly close to the mark (from distance, Julie Bishop was a ring-in), the skits are quick and well written and mostly well heard from a distance (I just missed a few lines, especially amongst music), the topics are current. It's all eminently professional. There's the problem: the problems they satirise are current and seemingly insurmountable. We read them every day in the paper. We read the disappointments and complaints and failures and lack of policy and you'd think there might somewhere, sometime, be some hope. But no. Just pusilanimous backsliding and Tea Party reaction and obstinacy.

Coal is king; science is conspiracy; truth is conditional. War is peace, freedom is slavery, ignorance is strength ... er, my slip-up ... The Left bears some blame with its radical relativity and identity politics that just leaves the field open for reactionary right-thinking and economic self interest. So, housing, climate, energy, democracy, refugees, wars, all failures or failing; all within the context of existential climate, food, water and such threats. And the bomb even makes its reappearance. No joy. It's argued that satire is a powerful weapon. Perhaps, although satire is the nature of much political information these days (eg. Fallon, Colbert) and that's coincided with all this failure of political possibilities. Satire is amusing, especially for those in the know, but is it effective? And I wonder how the Wharfies get away with some things they say. How much is satire protected under law? The identities, individuals or corporates are clear, often named, and ruthlessly shamed and ridiculed. Skits on tax-avoiding multinationals; Trump as Louis XIV, Eliz1 and Vlad the Impaler were stunning; more Trump of course. Dutton as Mr Potatohead, Turnbull as the Working class man, Abbott as the Joker to Wonderwoman Lambie, Hanson, Joyce, Roberts and the rest. Shorten was strangely peripheral, just mentioned, or maybe that's the relevant satire. The CFMEU got a hit along with Michaela Cash. I chuckled but it's all too dark for laughter. The final, terminal song was Let's face the music and dance. It's another great song by Irving Berlin, performed by Fred Astaire and Ginger Rogers in Follow the Fleet. I watched the YouTube video afterwards. They each, separately, are desperate and suicidal, but meet and instead dance. Thus was the Wharfies' final message for the night.

The Wharf Revue 2017, the Patriotic Rag, was at the Playhouse. It's written and created by Jonathan Biggins, Drew Forsythe and Phillip Scott. They perform with Blazey Best.
Posted by Eric Pozza at 3:41 pm