An Australian to the world 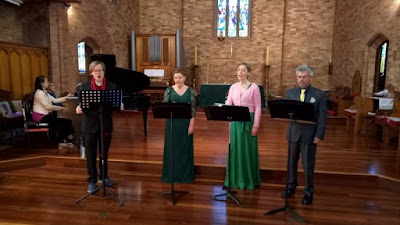 Canberra has shown me a very international Australia. I didn't have that feeling in Adelaide. It's derivative from the home of Federal government and associated institutions, the diplomatic core and the universities especially ANU, but also the people in our streets. I first noticed it with Frank Gambale, guitarist from the Pro Audio family who played around town in the '80s and has since recorded a string of albums with Chick Corea.

And the daughter of a work colleague who was a famed model in Paris and NYC. So, it's no particular surprise that Igitur nos played the music of Penelope Thwaites, of Melbourne but with relatives here, one of whom led and sang at this concert: Veronica Thwaites-Brown. This is modern music but with firm historical awareness - I even heard some jazz harmonies - with themes of Shakespeare and psalms and a missa brevis and a wedding gloria. The performance was beautifully done. Sweet harmonies from a capable choir, clear singing from soprano, mezzo and two tenors, empathetic accompaniment from piano and organ and even drums, and one feature from a children's choir. There's concern for humanity here, chosen to fit events or to express the words of various writers including her late father Michael Thwaites, once of Canberra. It's interesting to compare Michael reading his poem (find it on SoundCloud with music played by Penelope) and Penelope's musical take on this and further, the local interpretation. I enjoyed this concert immensely, but also admired it, for its worthiness and seriousness and all round excellent musicianship, in composition and performance. I find announcements for Penelope's music being performed in London, but nice to see we beat London to the premiere of one of the works, Five Shakespeare songs. Not that it's so important, but it's amusing. Penelope is clearly one very impressive Australian in the world and this was a very impressive array of locals performing her music.