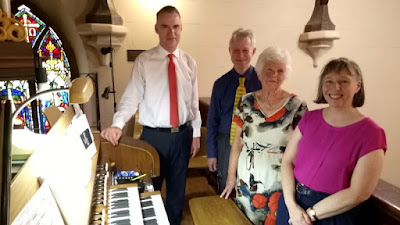 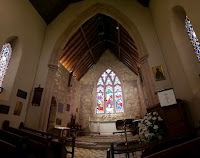 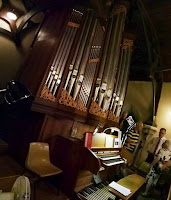 It's the oldest church in Canberra (1844), to the extent that it has a European feel ascending the very steep staircase to the organ loft. St John's Anglican Church is small, even with its extension of 1872. It's proud and tall with its 1877 spire. Internally, the stained glass is pleasant and of an era and the wall feature plaques for deceased parishioners, often military, MPs and the like. And the organ loft features a none-too-large but quite lively-sounding two manual, tracker action organ built by Ron Sharp of Sydney Opera House fame. I am working my way through the organs of Canberra with the Royal School of Churn Music (ACT Branch) and this was their last monthly concert for the year. Three organist played and one flautist featured on one piece. Darryn Jensen opened with four chorale preludes by Bach. Nigel Poole played three movements from Yon Advent suite. Rosemary Shepherd and Shiela Thompson played Grétry Concerto in C major for flute and keyboard and Shiela ended with five canonic variations by Bach. Suffice to say, a lovely and moderately understated concert. This is not a big organ with big, deep power, but neat and textured and nicely spoken and the pieces were similarly restrained. Really a very lovely outing and a touch of an older Canberra, to the degree that there is such a thing.