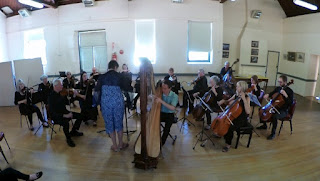 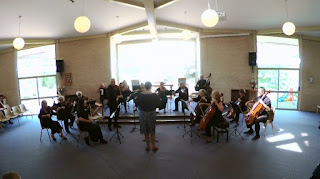 Our travelling circus reformed for the last of this year's concert weekends and again it was a great pleasure. And, I trust the audience considered it a musical success. This time, we featured visiting soloist Rowan Phemister on harp for a Handel concerto and a Debussy pair of dances. Yes, a varied pair, with the order of Handel and the C20th impressionism of Debussy. The Debussy was a pair of dances, Danse sacrée & Danse profane, so not obviously danceable in any contemporary sense. The other works were for the string orchestra, more Debussy and a Sibelius and one work that is another unusual find, perhaps not otherwise on the Net, that had one of our members converting the score in Sibelius from the hand-written part: Castrucci Concerto grosso op.3 no.4. Castrucci is largely unknown today, but Hogarth caricatured him and he studied with Corelli and played with Handel. He was a Roman violin virtuoso living in London. It surprises me that these discoveries remain, but they are not particularly rare given lots of hand-written music in store. The more obscure are in various libraries; ours was just a scanned handwritten score on IMSLP. So, another successful and satisfying Musica da Camera concert series, first up in Cook then reprised in Cooma for a small audience.

Musica da Camera performed Handel, Castrucci, Sibelius and Debussy in Cook and Cooma under under Rosemary Macphail (conductor) with soloist Rohan Phemister (harp).
Posted by Eric Pozza at 8:55 am