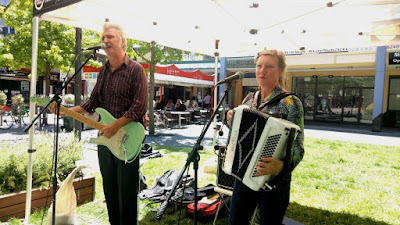 It was after the demos and I was wasting time mosying around Civic, the civic area, Garema Place, outside Hippo, rather than the privatised Centre.  A band was playing, or at least a duo, The Beez, two vocalists, male and female, on guitar and accordion.  They were playing Midnight Oils' Beds are burning as I arrived.  Very catchy, sounds fun, nicely lively.  Then, what?  German?  Yes, they'd switched to a verse in German.  I caught a string of other songs before they closed shop.  Faco Der Commissar, apparently in a Viennese dialect.  Never going to be Barry White, I assume an original (see The Beez performing this on YouTube).  Baissong (?), perhaps a Euro-take on Kiss' I was made for loving you, and that 80s glam-pop classic, Nena's Neunundneunzig Luftballons (99 balloons) which I've just learned has a theme of nuclear holocaust.  The Beez: nice and lively, great fun, with those unexpected Germanic lyrics.  Nice to hear some other languages on the bandstand: we are so unrelentingly monolingual in English-language countries.  It's a weakness.

PS. Megan recalls we saw their show "Don't mention the wall" (about the Berlin Wall) at the Artist Shed.  The Beez site says they toured it to Australian in 2013.  That's two years before the advent of CJ so no record here.

The Beez performed in duo format in Garema Place in Civic.  They were Deta Rayner (accordion, vocals) and Rob (guitar, vocals).