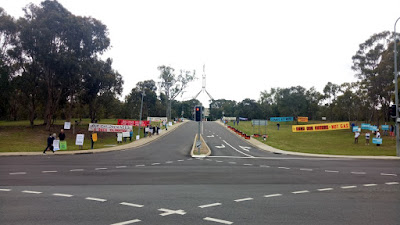 If you listen to my recorded music (under the pseudonym "The Pots" on Spotify et.al.) you'll realise I have political opinions.  Fairly strong and, at least I think, fairly ethical.  Also, I think, reasonably informed by good sources providing guidance from evidence.  Now, we have had some dog days of late.  The bushfires and Covid and ScoMo/LNP's response to rebuilding the economy and generally to climate and secrecy and security and much more.  But maybe there's some hope.  Trump got the flick and he seems to be strangely restrained in the face of defeat.  Biden is no arch-lefty (clearly to the right of our own revered Liberal Menzies, as is our contemporary Labor party) but at least he's not so impetuous and ill-informed and has at least some respect for truth and belief that it exists and we can at least approach it.  So there's some mild, distant hope.  Thus, I embarked on a day of demos.

First up, a morning fling outside Parliament in support of Zali Steggall's climate bill.  Not a big crew, mostly retired.  Strange that, but the kids have much less time these days, what with flexible work and dearer housing and the rest.  I was handed a sign to hold and it worked for me "Coal ... too stupid", but I wish I'd made one "Invest in Gas / What could possibly go wrong".  Well, lots, given Europe, US, Japan, South Korea, China (others too) are committed to give up on fossil fuels within 30 (China 40) years.  So it's not just survival of civilisation, but even survival of economy.  That's changing minds!

Second up, a lunchtime session outside the ACT Courts in support of Bernard Collaery and the subjects of secret trials.  I wish to say justice, but the essence of secrecy is the denial of justice.  Thus is the way of an increasing state of security, the primacy of Home Affairs and the rest.  Our local luminary journos spoke, Jack Waterford and Mark Kenny, with hosting presumably by host Sister Susan Connelly.

I took the opportunity to promote my albums to the fellow travellers at the demos.  If you've heard my albums, you'd recognise all these themes: climate, broken politics, Covid.  If not, catch up with these.  In the meantime, remember Gramsci: "Pessimism of the intellect; optimism of the will".

Email ThisBlogThis!Share to TwitterShare to FacebookShare to Pinterest
Labels: politics, The Pots