Near enough for jazz 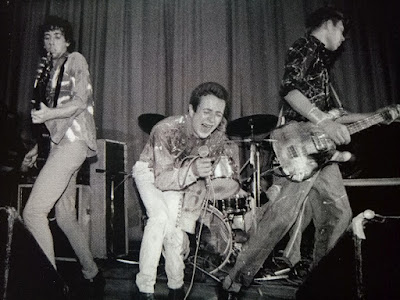 Not really near enough, but it is relevant.  Tilt played another best-eva gig for the opening of the British Film Festival at Palace Electric.  BTW the pic isn't Tilt hard at it, but from the Festival film White Riot about late-70s punk in Britain.  The Clash, I think, from the Festival brochure.  Not sure what makes for these best-eva gigs.  A good day, good acoustics, good feel, volume, repertoire?  I fought for tone this time, but it worked in the end.  Concentrating on tone is physical, especially on the double bass, but it lets me relax into melody, so better solos.  And I was standing, so there's that sensuous aspect of poring over a big, old, clumsy, wooden instrument.  And we had to reduce volume when one film started, and that has its influence, adding to subtlety and care.  Whatever,  it worked and we had a ball.