It was the local mates out for a straightforward, hot jam session at Hippo’s. Not as competitive as the mythical cutting sessions of old, but it was intense. Lots of solos were passed around, and the fact that I only noted 5 tunes in two sets hints at the type of event it was. Lots of fun, lots of flash, and an opportunity to loosen up and play hard.

The Miroslav Bukovsky band was advertised as a quintet, but ended up as a septet on the night. Miroslav Bukovsky (trumpet, flugelhorn) led, with John Mackey (tenor sax), Niels Rosendahl (tenor sax), Michael Azzopardi (piano/keyboards), Carl Morgan (guitar), Eric Ajaye (bass) and Chris Thwaite (drums). I’ve written on all these players before in CJ, so little more to add. I noticed Eric’s machine gun fingers dividing the beat and enriching the groove, and Chris playing a similar role with stabs and fills on snare and toms. John and Michael both remain resolutely manic and harmonically inventive (and we love them for it!). Michael plays a very mobile keyboard sound, continually changing tones and modulating notes, with piano morphing to synth or organ amidst a stream of substituted chords. John’s always just simply flat out, playing fascinating, complex, rich lines with immense intensity. In this context, and recently since his European sojourn, Niels was less frenzied and more composed. So much so that at one stage, I realised Footsteps had slipped into a reggae feel! And Miroslav and Carl were both there with breakout speed on bop and modern lines. Each player impresses in his own way. Their displays are all in individual styles and at a high musical level. 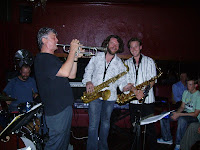 They saw me coming

Just 5 tunes? Perhaps there were six and I missed the count, but Footsteps was definitely approaching 30 mins. John’s fast bop-style Pantano Drive was much longer than on his CD, and Bronte Café was also much extended. The others were a latin and an earthy, flowing tune with Eric playing a growly bass reminiscent of Buster Williams. 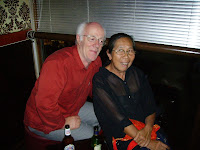 Oliver and Paik. Ollie studies sax at the Jazz School

As I said before, it was the cream of local jazz talent out for the night on the town.
Posted by Eric Pozza at 7:05 pm