Aron’s trio out for Harvest

I caught Aron Lyon and his trio playing at Mount Majura Vineyard for the Wine Harvest Festival. The day was fine and sunny and the wine was good (I had the Pinot and enjoyed it). And I enjoyed the music. The Aron Lyons Trio is Aron Lyon (guitar), Gareth Hill (bass) and Ben Braithwaite (drums). They are all stalwarts around town and graduates from the Jazz School. There were some environmental contrasts at times, as a tractor passed behind the band, or a plane flew low to land at the local Canberra “International” Airport. But mostly it was a lovely, relaxed style of standards, with a quiet, late-night intensity, played to a coterie of amateur wine tasters. 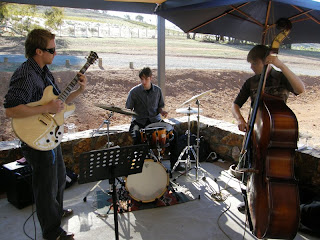 Aron told me how he enjoys returning to the jazz standards after venturing into R&B and other styles. And he does standards so well. These were richly interpreted, intuitive renderings with complex substitute harmonies and inventive melodies. He often strayed well away from the tune, but there was always a hint of the underlying structure, and always a natural return when he chose it. And the rest of the band was equally strong and comfortable behind him. Gareth moved easily with the Aron’s changes. I chatted with Gareth too, and he was also talking of opening his mind to the music and the rest of the band; how it’s an intuitive rather than logical process when it’s well played. Gareth and Ben formed an unwavering rhythm section in calypso and swing styles, and they each soloed in most tunes. Gareth was fast and comfortable across the full length of the fingerboard with displayed great dexterity and interest. Ben mostly traded 8s, and did one longer solo towards the end. 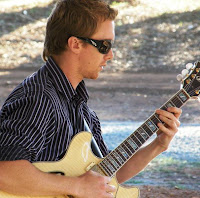 I only caught a few sets, and these were of the standard repertoire: St Thomas, Foggy day, Straight no chaser, Stella by starlight and the like. But they were so comfortably played and in such an intelligent and inventive manner. Really an excellent aural backdrop for a very nice viticultural drop!
Posted by Eric Pozza at 8:49 pm