It was an autumn afternoon, hinting at cooler weather to come, but still and lovely in the beer garden at the George Harcourt Inn. GHI has jazz 3-6pm each Sunday afternoon, and seems to have bands booked for throughout winter (a good sign). There was a largish, relaxed audience, and the band today was Tico Tico.

Tico Tico is the duet made up of long-term local musicians with a history at the jazz school with several albums behind them. Tico Tico are Cecilia Kemezys (vocals, flute) and Stephen J Scott (guitar) accompanied by midi drums and bass. The bass and drums were pretty tame, but the performance by the real players was very satisfying, and at times exciting.

Exciting is a strange word to use for a very pleasant, mainstream duo, but the musicianship was exemplary, and the solos were frequently impressive, and much more investigative than this style of performance would otherwise suggest. These are a competent pair. They have travelled in Central/South America, and recorded CDs under the influence of this genuine latin music. They have worked on a daily basis in 5-star international hotels overseas. So we could expect considerable professionalism and expertise. We got it. 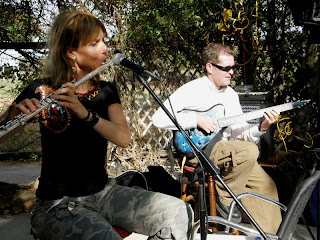 Cecilia sings with a pure, clean voice, but I also heard an occasional growl. Her pitch is good, her vibrato is satisfying and not overdone, and her singing is multilingual (Spanish I guess, but perhaps Portuguese). She also plays a mean flute, melodically and soloistically. Stephen is a hidden local guitar master. His solos were rich with substitutions, fast and clean, and varied in interval structures. So, despite the workmanlike backing, it was a very pleasing performance, and even exciting at times when a solo lifted it beyond entertainment.

The repertoire covered latin (genuine latin, influenced at the source, and sung in the original language), standards, popular tunes, and the like. Titles included Have you met Miss Jones, My baby just cares for me (dedicated to Bronwyn Bishop?), Perhaps perhaps perhaps, What a wonderful world, Beautiful love, The two of us, Jobim’s Agua De Beber, and the like. So, this was nice, pleasant stuff for a warm beer garden afternoon, and excellently done.

Tico Tico are playing at the George Harcourt Inn on the third Sunday of each month. Free entrance, interesting beers on tap.