The intimacy which is voice

Singing is not central to my experience of jazz. Most jazz I hear is instrumental, and I don’t know jazz singers too well. But I’ve been singing in a choir in recent years, and I’ve found a love of the voice (if not a love of my own voice). It’s taught me the elemental and physical pleasure of voice; the way it’s intimately experienced, in a way that an instrument just isn’t. In recent days, I’ve been listening to the vocal gymnastics of Kurt Elling, and thinking back on some excellent performances by tenor player Jamie Oehlers, a fellow winner of a prestigious award at Montreux, so I was looking forward to Kristen Berardi with considerable anticipation.

Some background. Kristen is from Queensland, but now has a Canberra connection as the vocal teacher at the Jazz School. She also has had lots of success in singing, including winning the Shure vocal competition at the Montreux Jazz Festival in 2006 along with various local awards, including Wangaratta. So I was expecting a very capable singer. What I got was an imposing singer, but also an adroit, if subtle, band leader and a composer to boot. The band was Kristen Berardi (vocals), James Muller (guitar), Mike Majkowski (bass), Hamish Stuart (drums) and David Theak (tenor sax). The tunes were a mix of standards, latins and ballads (Jobim’s Day in the life of a fool, Just squeeze me, even Bill Bailey) and originals by Kristen. So that’s my first discovery: she’s an able songwriter.

But I was mainly there for her singing. Kristen intones beautifully but also plays freely with time and harmonies. So this is sinuous, mobile and intriguing singing. Her vocal quality reminded me of West Coast USA, perhaps Ricki Lee Jones or Maria Maldaur, but much more complex and sophisticated. Not bluesy or gravelly, but pure, sometimes sweet, and always lithe and controlled. She would sing lines like a sax, anticipate melodies like a pianist. A masterful performance.

But how was she a capable band leader? Let’s face it, guys, the women are pretty subtle in the art of leadership. Kristen was just one example. She urged her band with her broad smile, controlled movements of the structure with simple waves of a hand or inflections of the voice, interpreted sounds with small dancing movements, and led from the front with supple melodies and inventive vocal solos. 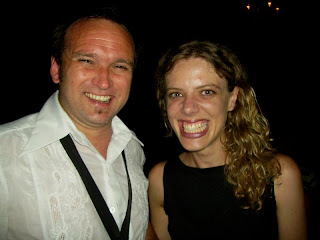 The rhythm section suited well. No-one can get too much of James Muller; enough said! He displayed his incredible exploratory flair throughout the night (where does he dredge up those discordant chordal substitutions from? wondrous!), although I found him a little more restrained in this small group format. Mike Majkowski was loud and solid and pushing. Hamish Stuart supported well and played several great solos. A drummer friend commented that his sound is superbly balanced between drums and cymbals. I thought there was a lively roughness about the bass/drums combination at times. It was more manic energy than civilised restraint, and quite in contrast with James’ cool, inventive precision. David Theak displayed some of this lively roughness, too. I heard his solos as ebullient and hectic, rather than flowing, and they displayed both diatonic and frequent outside passages. I was blown out by some fabulously accurate unison and harmony lines by David and Kristen. It displayed such precision and was so interesting. Just proof of the pair’s shared accuracy of intonation and interpretation. And so it should be, I guess: Kristen told me later that they are married.

In summary, an entertaining but interesting night of vocal jazz at Hippo’s.


BTW, if you've got this far, I'll congratulate you. But you can also congratulate me. This is post no. 100 for the CJ blog. Eric