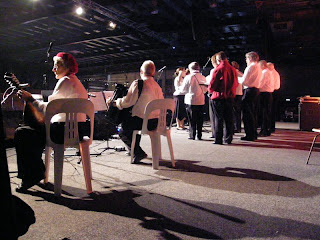 I sing tenor in the Dante Musica Viva (Italian) choir. DMV performed there this year, so I got free entry. We also got the biggest PA on the largest stage, although just at a warm-up time. We mainly sang Italian traditional tunes along with several songs of WW2 partisans. The songs are incredibly infectious, sometimes cocky and occasionally emotional, and this choir enjoys itself and lifts in performances. So it was fun.

I roved around the event in the afternoon. There were lots of ethnic dancers (including the jangly Morris Men) and earnest singer songwriters, but several capable blues players interested me. There’s bound to be something for any taste at such a large event. At a previous festival, I remember the find was a very capable Scottish guitarist chatting about Mingus and playing Goodbye Pork Pie Hat. 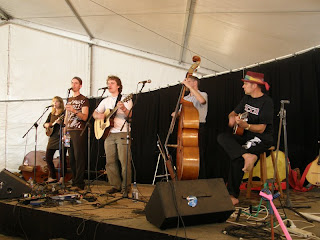 This year’s find was a band that announced they were a cross of Irish and Hungarian. This was interesting, especially given they started with a tango. But they were competent and played some original or otherwise well-chosen tunes, and featured two (!) bassists, along with four part harmonies, and the very strong lead voice of Ben Palumbo. The band was Urban eXcentrics. Well worth a listen.