White Eagle offered another double bill last night. This is obviously developing as the nature of the event, with audio provided and recorded by ArtSound, and a local band and a local or visiting band as a main act. Tonight’s show featured Ivory Hunter, Daniel Hunter’s band, and the return of Sydney’s Trio Apoplectic. 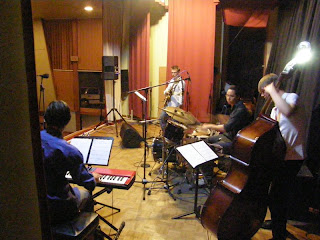 Ivory Hunter is led by Dan Hunter (guitar), with Yen Nguyen (drums), Gareth Hill (bass) and Munro Melano (keyboards). I hadn’t heard of Ivory Hunter before but I assume the musos have been playing together for years at the Jazz School. I’ve reported on these players several times on CJ, but mostly they were playing the standards repertoire (very capably). However, Ivory Hunter is a platform for originals. The tunes were penned by various band members and covered a range of approaches. There was one bordering on hardbop, but mostly they were more melodic and tuneful. I particularly liked a couple of tunes from Gareth, a ballad and another tune with a very convulsive melody leading into a hard swing. Daniel’s Act of will was an interesting piece with a sustained quarter-note melody that had my mind drifting. And I have to mention Dan’s Scofeel. It’s an obvious take on Scofield, with indefinite timing, sleezy down-South solos, bluesy organ in the background, and Chambers-style drum patterns crossing the bar lines. So there was quite a range of styles here: floating and relaxed, bluesy, out. I had the feeling these guys were beyond simple exuberance, and were seeking more musical statements.

Daniel always plays in a restrained and careful way, and he did so this night. He plays occasional flourishes but lots of well-considered melodic lines. Gareth also led as melodist on several tunes and played some excellent solos. He’s a strong player, and his tone is also strong: good muscular fingers dragging the strings for a clear, woody tone. Munro played synths at times, along with piano and organ sounds. I particularly liked his comping, especially following his responses to Dan when he played outside. Yen held it all together and played several expressive solos, not least on his own compositions.

As for the band name, Hunter is an obvious reference, but is there some other message? Perhaps. The smooth surface and alabaster colouring of ivory seems to fit the music. 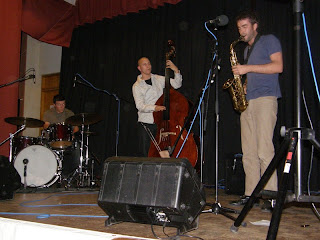 Trio Apoplectic were quite a change after the more relaxed Ivory. Right from the top, they played with intensity, energy and intelligent interaction. I’ve written about TA before; they played at the first White Eagle session. Their return was quite triumphant. This was modern jazz of a high order. Intellectual, emotionally demanding and satisfying, great playing with great, clear sounds, exploratory. I love this style and I was trying to place it. Perhaps Joe Henderson? I asked them about their influences. Interestingly, they offered Bernie (McGann) and when I further inquired, they suggested other players around Sydney.

TA are Dave Jackson (alto sax), Abel Cross (bass) and Alex Masso (drums). They play a mix of standards and originals. Originals come from the pens of Alex and Abel, especially Abel. They played Monk’s Boo Boo’s birthday. Originals included the oddly named Details of how to get apoplectic on your licence plate (apparently a renowned title at Sydney’s Birdland records). There were soundscapes and free styles, hard swing and balladic styles, bowed bass reminiscent of didjeridoo and sax harmonics. Several of these tunes are on the CD, and were played at TA’s last White Eagle concert. I feel they’ve explored the music much further, and this was the source of such a satisfying performance. 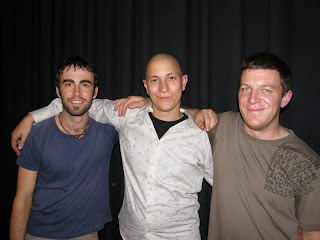 They all played with intense energy and commitment throughout the show. Noone played too obviously, or displayed the chords too evidently. The harmonies and counterpoint were fascinating. They were also all very balanced, each player providing an essential ingredient and contributing equally to the complexity and richness. This is just highlighted by the open sound a chordless trio. Dave plays alto, and it fit so well: smooth and sinuous, but also intriguing and exploratory. Abel played hot from the top, and played some excellent solos. The underlying chords were interpreted so subtly I wondered if the tunes were modal. A lovely modern style. Alex was mobile and varied on drums: brushes or sticks, cymbals or drums, sparse or dense.

Another great night at White Eagle, in expectation of White Eagle’s debut as an international venue next week, with the bassist Senator Eugene Wright.
Posted by Eric Pozza at 4:57 pm