You may know that Kevin Hunt is the first Musician in Residence at ArtSound. I imagine the relationship is a little ill-defined or at least pretty variable to suit both parties, but it’s an excellent idea, and I saw one hugely productive aspect of it today. 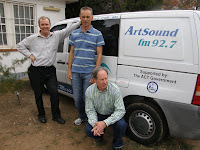 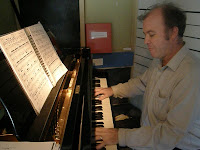 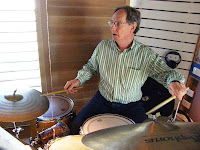 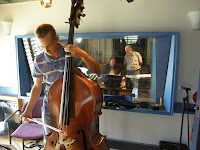 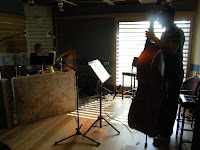 Kevin Hunt has an interest in classical (especially French) music of the era of Ravel and Debussy. Apparently, his masters thesis was a study of this music and its interpretation in a jazz format. For this, he worked with Gary Holgate (bass) and Lawrie Thomson (drums), and he has recently performed this repertoire at the Adelaide Festival of Arts, and is due for a performance in Canberra (Southern Cross Club, Thurs 19 April). So this is a labour of love, as it would need to be for it is complex music. It must have involved plenty of investigation and reinterpretation to the jazz idiom. I saw some bass charts and they were deceptively simple, but the music was complex and rich, and vibrant in classical, jazz and occasionally blues forms.

The session was the second day of an open house recording session. The first day was spent on setting up mics, equipment and a workable mix, as well as refining arrangements. The second and third days are for recording, and there will be mix-down and mastering sometime in the future. This second day saw the trio recording Kevin’s interpretation of movements 1 and 3 of Ravel’s Valse noble et sentimentale, movements 1 and 3 of Debussy’s Suite Bergamasque (no. 3 is “Claire de Lune”) and Gershwin’s Rhapsody in blue. The interpretations were fascinating. Kevin explained that he maintained the structure of the pieces, but he often rephrased famous lines or reharmonised in a jazz format, or broke into solos sections which were influenced by the original but not just imposed on the original piece. Kevin also showed himself as a great teacher in this process. He explained the approach to the students present, and took a real interest in their experiences and development. So it was much more than just a recording session; it was also an effective training workshop. So, we heard that Ravel’s work comprised 7#9 > min > dom/maj7 movements at one stage; how the flourish at the intro to Rhapsody in blue covers the full range of the clarinet, and how Kevin approached its replacement in this reinterpretation; the extent of the “heavy reconstruction”; the application of jazz minds to classical forms, and so on. It was a fascinating discussion to accompany the engaging performances. 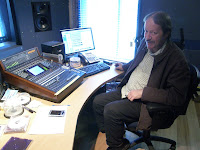 I was also interested in the recording processes. Tony Hunter was the engineer for the session. The equipment is excellent, and the result will no doubt be professional. Mics included Neumann, AKG, Shure, Rode. The mixer is a digital Yamaha (DM1000) with Cubase SX and Genelec monitors. All top stuff. It was also quite a stunning change to move from the mixing room, with its precise and clinical sound to the live room with a loud Yamaha 7-foot grand piano in action. But all fascinating and educational. 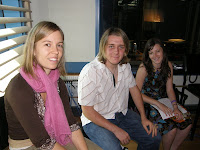 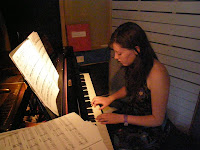 Congrats to Kevin, Gary and Lawrie for the intriguing, impressionistic music, and to ArtSound for the inauguration of their musician-in-residence program.