A fedora is a hat

A fedora is a soft felt hat as used through the mid-20th-century: narrow brim, creased crown, pinched in front, as in Bogart and film noir. Well dressed men wore them from the early 1900s to the ‘60s, but they faded after that. John Kennedy sometimes takes the blame because he didn’t wear one for his presidential inauguration. He actually wore a top hat and took it off for his inaugural speech, but nevertheless this is held as the marker for the end of the fedora’s prominence in American life. Not that men were actually so concerned. The English version is the trilby, as in the Avengers. 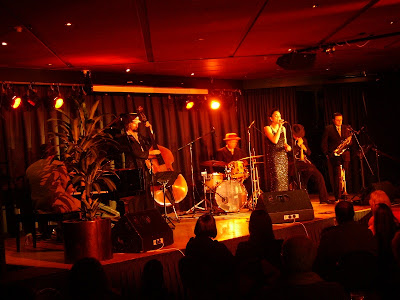 In Canberra we have a particularly competent and busy commercial band called the Funky Fedoras. In their jazz incarnation, they are Angela Lount & the Fedoras. It was Angela and her crew that launched an album last night with an event at the Southern Cross Club. The band comprised Angela Lount (vocals), Wayne Kelly (piano), James Luke (bass), Mark Sutton (drums), Dan McLean (trumpet, flugelhorn) and Andrew Pogson (alto sax).

According to the Canberra Times, this was to be a night of “classical jazz”, meaning the uberfamous, vocal standards. These were the tunes of Ella, Sarah, Errol, Fats: Misty, This can’t be love, Ain’t misbehavin’ and the like. There was also one original, a pleasant ballad penned by Angela and Wayne. My favourite song on the night was the bittersweet old tune Smile, which was apparently written by Charlie Chaplin for one of his films. (Was there no limit to Chaplin’s brilliance?) To end, there were some bluesy tunes, including a funky version of that sultry women’s number, Don’t touch me.

The presentation was slick. Angela wore a long, slinky, glittering, black gown, and even changed her outfit for the second half of the set. The guys wore suits and multicoloured fedoras. The music was professional. The horn harmonies were mostly sharp as a tack. The arrangements were tight and impressive, in the show band ilk. The solos were brief and capable and in the requisite styles. Angela’s voice was dark and rich and sultry. So, popular jazz and classy entertainment.

I liked the intimate atmosphere. It was noticibly a night for family and friends. Apparently, Angela is part of a large but close extended family. It showed. There was great joy and lots of familial welcomings in the audience. There was a voluble Tony McGee as host. There was even an appearance at one stage by Angela’s vocal coach, with the goss on Angela and her commitment to the craft of singing.

This was professional, mainstream jazz as entertainment, and it was done well. Not performance on the edge (although these guys can play that too) but a friendly, pleasant, entertaining night for lovers of mainstream “classical” vocal jazz.

Thanks for the review, just a quick note, it's Angela Lount and Andrew Pogson. Thanks!

A fedora is a bendable acquainted hat as acclimated through the mid-20th-century: attenuated brim, channelled crown, bankrupt in front, as in Bogart and blur noir.

It 'was noticibly from family and friends. It seems that Angela is part of a large, but close to a big family. It showed. It 'been a great pleasure and a lot of public welcomings family.

It seems that Angela is part of a large, but close to a big family. It showed. It 'been a great pleasure and a lot of public welcomings family. He was talkative, Tony McGee, host.