Long residencies are a special thing in music. They develop a particular mystique. They engender a family following (“like our living room”) but also a sibling-like interaction between the players. The gig at Trinity Bar in Dickson on Tuesday nights is one of these. Members have changed slightly over the years, but the core is still there, and the approach remains, along with the competency and interaction, and sheer intense groove of the session. This is a hidden gem of jazz in Canberra, and should not be missed. 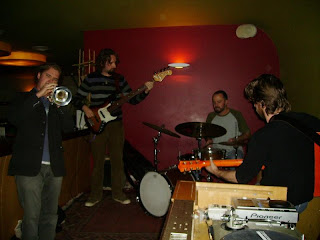 The band is Trident, or more correctly, Trident+1. Members are James Luke (bass), Lachlan Coventry (guitar), Chris Thwaite (drums) and Ben Marston (trumpet). Presumably Ben is the +1, although they’ve been “+1” both times I‘ve seen them recently. I wrote about the band when they played recently at White Eagle under Effects, anyone. Needless to say, they were playing with lots of processing and effects at that gig. James tells me they’ve recently dropped the effects, and it was a clean, clear performance at very moderate volume that they gave last night. But the playing was no less intense or capable. This was sharp, closely interactive groove based on well-disguised standards. Truly excellent playing, and perfect for the club venue. 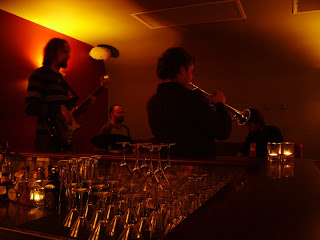 The first set comprised Nica’s dream, Nostalgia on Times Square, Stella by starlight and a blues that I didn’t recognise. As I said, it was well disguised. I’d listened for 10 minutes of perceptive solos against sharp funk and rock rhythms before there was a recognisable head or chord sequence on Nica's dream. Even when there was something recognisable, it was not expected: the bridge was a strangely timed unison bass/guitar part against the standard melody. And then it dissipated again, this time to reggae and another trumpet solo. The others tunes were just as unanticipated. James blew me out with a great Fender fretless jazz bass tone, a variety of tonalities, chords, thumbs, slap and fingerpicked funk. Pity about his amp which was breaking up occasionally. Lachlan played with a clarity and traditional tone from a semiacoustic. Chris had a minimal kit, and Ben was playing clean trumpet. But they all soloed excellently. Chris against some terrific band unison work on Nostalgia. James played some interesting cross timing, including half-note triplet chords against 4/4, and splendidly expressive lines. Both Lachlan and Ben soloed with panache, and moved into and out of tonality with ease.

In all, a night of very capable laid back, varied and authentic grooves. Free entry, ubercool but comfortable surroundings and reasonably-priced drinks make this a must-do activity for a Tuesday night.