What’s a House of Reps…

Here’s a riddle for you. What’s a House of Reps with four members, a young leader, endless down-to-earth go-ahead energy and hot air put to purpose. Why, it’s the HofR that played last night at Hippo’s. House of Reps is a great name for a band, especially for this collection of players. They are all based in Sydney (mmm, leadership material?), and three have major Canberra connections. HofR are Brendan Clarke (bass), Dale Barlow (tenor, soprano sax), Ben Hauptmann (guitar) and James Hauptmann (drums). Just like at the House on the Hill, there was a lot of blowing and huffing, but in this case, it was all in a good cause: an evening of hot and heavy rhythms, intense and sustained latin, bop and swing (and one lovely original ballad), and very capable and sometimes heavy soloing. 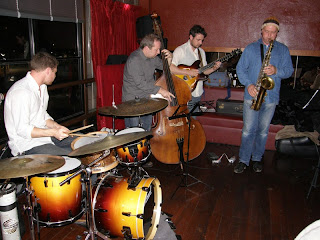 Dale Barlow is a renowned Australian saxist, having played overseas with top names, including Art Blakey’s famed Jazz Messengers. He set a high standard for the band, with a rounded, full tone and long, seemingly endless, fast passages, and extended, well formed solos. But he was just one of a group of busy players from the Sydney scene - no slouches, these. Ben backed with restrained, sometimes too quiet chordal work. But he loosened up with multi-octave arpeggiated runs and long, angular, cubiform solos, mostly using a distorted, sustained jazz-rock tone and occasional strange, effected tones. His brother, James, was massively energetic from the get-go. He was all driving rhythms, sticks flailing for frequent fills, and body moving in tandem with the music. This was infection and commitment at the individual level. Brendan seemed to be the leader, or at least he introduced the tunes. He was in the best form I’ve seen him. A clear, deep sound supporting fast walks and perfectly appropriate latins and fills, but he was a master on the solos. These were some of the most satisfying bass solos I’ve heard in some time. Ranging freely over the fingerboard, to the highest thumb positions, melodic, sustained patterns, accurately pitched, clear and audible, long and developed. Truly some excellent solos from Brendan on the night.

They played a mixture of originals and favourites. The opening Kenny Barron tune was followed by a lengthy version of Invitation. It’s a favourite of mine, and was interestingly juxtaposed with John Mackey’s Coltrane commemoration performance of the week before. There were also originals, including a rollicking hard bop piece by Dale and a truly satisfying ballad by Ben called Unity Hall. This was a big change from the rest of the night, mostly because it was of ballad format, but also because it was performed as a trio. 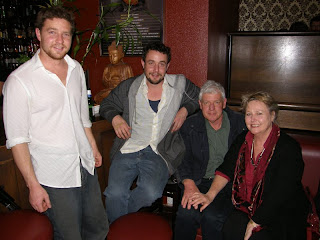 The Canberra connection was strong. Brendan, Ben and James are all Canberra boys, and products of the Jazz school. Ben and James also have a sister, Zoe, who’s an excellent bassist and also based in Sydney. A talented family! So the night was one of family and friends, and the intimate atmosphere you experience when successful musos return to play in their home towns.

So, while many of us are waiting in expectation of changes in one House of Reps over coming months, I reckon this one doesn’t need any. I’m not so sure about the big House on the Hill.