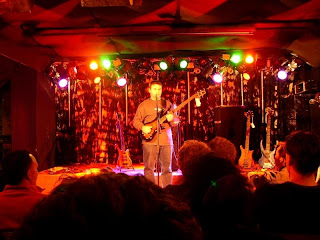 Warwick, the renowned German manufacturer of electric basses, recently reached its 25th anniversary, and celebrated it with a string of events and workshops. The local ones were mostly in Melbourne, but we got a workshop here in Canberra with the American bassist/singer, Seth Horan. Seth didn’t really play jazz on the night. But he’d started on double bass, and still plays it, and showed awareness and love for it, and blew a few fusion solos on the night. Mostly, though, it was love-themed pop/funk tunes played by looped basses with his vocals over the top. It was good, capable playing: a great facility with slap, but also a little walking, tapping, fingerwork and fusion soloing. Most impressive. And there was the spiel for Warwick, which was interesting in itself: expensive tonewoods, raw or lacquered finishes, active/passive, pickup placement, setup, midrange punch. And, of course, the requisite jokes. Par for the course for bassists. It was a bit loud for my ears, especially when supplemented by a PA, but that’s the nature of these rooms. I won an embroidered Warwick t-shirt for asking plenty of questions (I had more). All round, good fun for bassists.