It’s 40 years since Coltrane died on 17 July 1967. His career was short, but his influence is immeasurable. Enough so that one review of his classic album, A love supreme, states that it’s “almost impossible to imagine a world without A Love Supreme having been made”. That’s a big claim, but it’s a great album.

John Mackey is a local tenor star and an ardent admirer of John Coltrane. That’s not unusual for a tenor player, but his performance in memory of Coltrane last night was truly unusual: powerful, true to form, and a blissful experience. It will rank for me as one of my memorable jazz nights. John was joined by Wayne Kelly (piano), Mark Sutton (drums), and a Sydney import for the night, Jonathon Zwartz (bass). 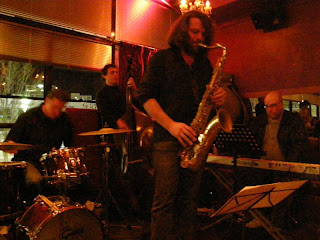 Why so memorable? The tunes in the first half were fabulously played, but common enough: Some other blues, Invitation, Naima, Like Sonny and Giant steps. And the encore was that very common Coltrane standard, Impressions. The playing was always highly capable, always interesting, frequently stunning, and the players performed sympathetically. But what really stunned me was the beauty and extent and exuberance of the feature of the show: a performance of the classic Coltrane album, A love supreme. John introduced it as a celebration, not a replication. It’s an intense and immensely satisfying piece, and hugely challenging given its stature and the brilliance of the original players (Coltrane, Elvin Jones, McCoy Tyner, Jimmy Garrison). But John & co performed a stunning interpretation. I couldn’t imagine anyone avoiding goosebumps as that glorious melody from Resolution rang through the crowd. Or hold back the waves of chuckles and admiration as another immensely satisfying pentatonic solo rolls from the horn. Or indulge in the so-steady bass lines or the animated drumming or the rich chordal colours on piano.

From the top, the night was hard bop, challenging harmonies, joyful twists and turns of immense musicality, sheets and slurries of notes and communicative, solid, sometimes sleazy, undercurrents from the rhythm section. It built from a moderate place, as did Giant steps itself, to a frenzy at the end of the first set. But the pinnacle was the album performance. A love supreme is made up of four parts: Acknowledgement, Resolution, Pursuance, Psalm. It’s a rendition of Coltrane’s spiritual and meditative journey. It was a pinnacle for the night, and one major peak in the ranges of western music. 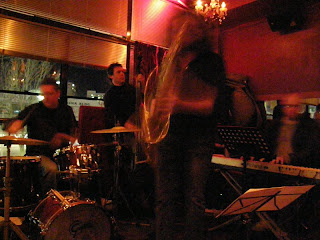 The players all seemed inspired by the challenge. John was obviously respectful of his instrumental mentor. Variously fast and flowing, or thoughtful and restrained, or impassioned and clamorous. Mark was obviously in awe of Elvin. He played with a commitment, volume and mobility beyond what I’ve heard from him before. I loved Wayne’s chordal work above all, colouring and moving the harmony background for John’s solos. But then, his solos weren’t lazy, either. Jonathan played solid and fast, clearly and fluently, but impressed me particularly with individualistic solos. He’d lay back to take control of the scene at the start of a solo, then maintain and develop it and perhaps end with a sudden denouement. It was a fascinating approach. But the whole was greater the sum of the parts. This was a group effort on a huge challenge, and they pulled it off. John was somewhat thankful at the end – for Hippo’s ongoing support for jazz, and for an attentive audience. It was one of those nights.

Thanks to John for leading this, and Wayne, Mark and Jonathan for taking on the challenge. Truly a performance to savour.
Posted by Eric Pozza at 6:13 pm