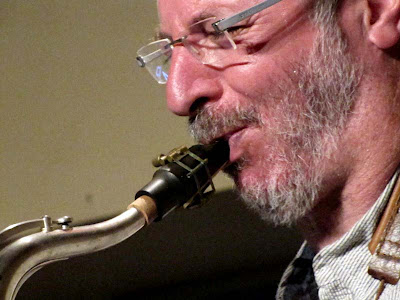 You get a clear feeling that a musical outing with Mark Ginsburg is serious and informed. He presented his quartet this week at the Gods. It was the last night of their tour, so the band was comfortable with the tunes and their interpretations and somewhat unleashed in their improvisations. Mark has been researching the links of Jewish cantoral singing and jazz improvisation for his Masters thesis at the Sydney Conservatorium. His recent album, Generations, and this concert are products of this research. You can hear the depth of the tradition that infected the young Mark as a singer in a synagogue choir. He’s got a passion for carefully built melody with a touch of middle Eastern scales and phrasing. Several of the tunes were actually from the Jewish liturgy, so presumably just reimagined for jazz quartet. His tone also spoke of awareness and presence. I particularly noticed it on his soprano that sounded so full and rounded, but his tenor was similarly smooth and big. Mark clearly displays a passion for the music and a seriousness in that passion. 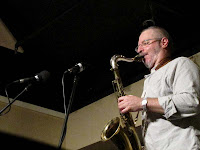 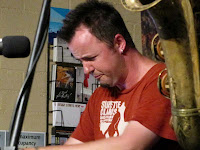 The band was satisfyingly in tune with Mark’s approach. Karl Dunnicliff played some wonderfully fluent and capable solos that seemed to bounce through positions, but mostly he laid down steady ostinato lines against a busy and ever-rising drum accompaniment from Tim Firth. I was sitting near Tim, and was fascinated by a seemingly relaxed performance on a basic kit that twisted into complex or extended fills or grew to busy statements that fell so easily from his sticks. Drums seem to often lead the level of excitement in modern jazz, and I felt it here: slick and relaxed in technique, but busy and complex in effect. Greg Coffin’s piano provided a harmonic backing, but I mostly noticed him when he soloed. These were strong and inventive and varied solos, both in chordal flows and in right hand improvisational lines. I asked him later if melody or chords led his solos. I wasn’t surprised he said chords; I thought I could hear an adventureousness with harmony. The overall effect of the band was often a big and full, well stated melody or solo line out front, and a busy shower of rhythms and fill behind, even one spot where the rhythm section broke into cacophony with Mark out front bravely holding the melody. Metaphorically, it might have been Mark speaking of a religious or cultural permanence against a disintegrating world, but it could just as easily have just been an effective and involving musical statement.

A few other observations: Mark’s friendly and intimate patter (and South African accent); plenty of comfortable medium tempos; some very open solo opportunities for sax and piano and bass; an unrushed and pensive approach. And some lovely solid, steady swings towards the end of the night, including a blues by Abdullah Ibrahim = Dollar Brand (a nod to Brendan).

ArtSound was recording, so listen in for this concert sometime on Friday Night Live. Mark Ginsburg (soprano, tenor sax) led a quartet with Greg Coffin (piano), Karl Dunnicliff (bass) and Tim Firth (drums) in an exploration of the crossover of Jewish musical traditions and jazz improvisation.
Posted by Eric Pozza at 10:28 pm