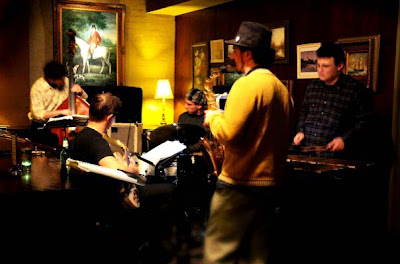 By Daniel Wild
Pic borrowed from Experiment Street's FB site, with thanks

Nestled in between Kuletos and the Marlborough Hotel in Newtown is a new type of establishment popping up over Sydney since the relaxing of the licensing laws. The Corridor appears to be a slim terrace turned into several slick and intimate rooms, or rather a series of corridors on different levels, flanked by modern art with pop-culture references. In the top room are some comfy chesterfield chairs and sofas. I commandeered one of these to hear the jazz quartet Experiment Street play for a relaxed group who enjoyed the food (dips, antipasto), wine and chill jazz.

Lindsay Winkler and Mike Walder entered the room on sax and bass to give us extended ruminations on Stella by Starlight, before Roman Pulati on guitar and Steve Lamante on drums casually added the rhythmic texture that brought the piece into full view. Pulati’s punctuated sharp nine chords and parallel work up the fret board provided underpinning and responses to Winkler’s silky sax tone.

Some straight ahead pieces followed, the four/four beat more pronounced, but that didn’t detract from the flow and rhythmic momentum of the group. It is becoming more common for jazz musicians to write straight eight compositions and arrange older standards into the straight eight format. The lack of triplet swing figures was more than made up for by Lamante’s regular tapping on the high-hat, with an offbeat accent every four or so beats to add movement.

Does one need a constant dum-de-dum to be reminded that obviously that jazz is supposedly all about swing? Lamante has a sharp attack and his snare attacks break the air with crisp sharp, yet nuanced thwacks. Even with brushes his dynamic range is large and his tone well defined. He supports the soloist well and knows when to add a couple of well-timed rolls to boost the impact of an evolving solo.

There are more subtle rhythmic shifts alive in jazz today, and the smooth jazz feel is increasingly sought after by audiences who don’t always want to be rocked to the core. Experiment Street choose their numbers wisely and play to the audience. When the pace gets more upbeat, Winkler adjusts his style accordingly. Like Pulati on guitar, he knows how to build a solo.

Winkler is very good at communicating with the rest of the band and it is a delight for the audience to bear witness to the spontaneous creation of confident, heartfelt music, where the musicians are definitely having fun.

Experiment Street finished with “You don’t know what love is”, a moving medium paced ballad that transported the listeners and had one man down on the floor praying for an encore. Experiment Street will regularly be performing at the Corridor so if you’re walking down King Street on a Tuesday night, why not drop in and discover the new faces of Sydney jazz. The Corridor is tapping into the speakeasy market, and Experiment Street knows that audiences are still keen to hear some no-nonsense, expressive main-stream jazzativity. 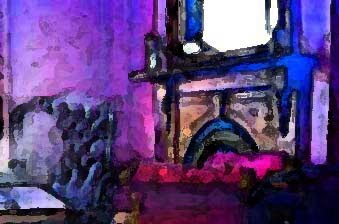