For a good night out

The Snappers were plain good fun. They’d started when I arrived, and there were several people jiving in a small space in front of the band, and a lively scene happening. The musos were applying themselves with energy and humour to grooves and solos, but there was also a studied nonchalance as they would retire off stage to get a beer or just muse. Nicely presented, I thought. This is a band that’s aware of its presence, and playing up its job as entertainers. But they are professionals who have to make the dosh, and they’ve got experience behind them, so I was not surprised. Not surprised either that they might be working the festivals and Melbourne and even Iceland and Scandinavian circuits. This was entertainment. 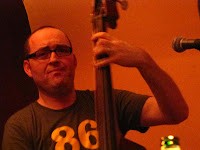 I didn’t actually take too much notice of the individual players. What I did notice was the range of po-mo tongue-in-cheek period pieces, the boogooloo and R&B and swing from as early as the 1920s dance era that just oozed from the bandstand, and the slick arrangements and capable playing that carried all this off. All was well arranged with a veiled seriousness under the light-hearted surface. You could hear the work they’d done in rehearsal and also the slickness from regular performances (they are currently on tour) as they carried it off with ease and panache. There were neat little bass solos tucked between horn solos, or sharply harmonised melodies between guitar or drums solos, or tight harmony fills behind various solos. There were vocals that toyed with lyrics and the audience, presented with hoary gutbucket growls. I noticed a lovely unison vocal/horn melody at one time that made me laugh with pleasure. I liked the sounds, too. The bass was solid and present. The horns were out front and nicely consonant, and the guitar was clear, with a touch of more modern styled soloing. I didn’t recognise too many tunes, but I did know the feels: bluesy cut times and loping swings. All so neatly done and amusingly presented.

One mate said that Melbourne’s like that. I thought of a busy scene where professionals have to make a living and how this promotes entertainment value. I certainly enjoyed it, and it was interesting to note the different audience and those dancers early in the night. It’s art that makes the music, but it’s craft that ensures you get paid. The Snappers was a joyous mingling of the two.