It was Bob who said: “Thank god for undergraduate humour” and I had to agree. SCUNA, of course, is the ANU Choral Society spelt backwards, and we were at Llewellyn Hall for SCUNA performing Mozart’s Requiem with the National Capital Orchestra and various vocal soloists. The program was a big one. The first half started and ended with movements from Mozart’s Symphony no.25 in G minor with a few arias from Don Giovanni (oh, the cad!) and the Magic Flute (cute Papageno) in between. Megan knew the symphony, so found the structure a bit strange, but the music was attractive. For the first half, the singers were soprano Rachael Duncan and baritone Benjamin Connor. They presented interesting personalities on stage. Benjamin acted the part with operatic corniness that fitted the bill. Rachael was just herself, beaming throughout and so obviously enjoying the performance. Impressive singing on both parts, but I particularly liked Rachael’s strong and full voice although the vibrato was a little too much for my tastes. But this is not my culture. 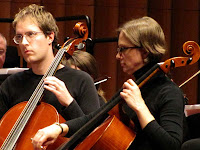 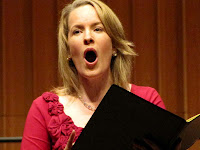 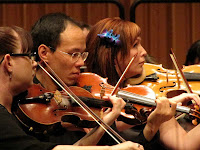 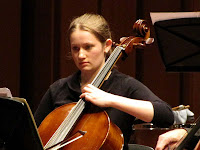 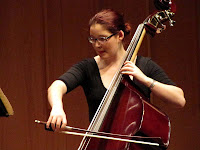 The main part of the night was the Requiem. The orchestra reappeared, as did a choir of about 90 singers and the front line of soprano, mezzo-soprano, tenor and bass. And the sounds from the top were glorious. I’d been reading the discussion on who wrote what (Mozart died after writing very little and the work was finished by his student Süssmayr), and an interesting online discussion on playing the trombone parts in the Tuba mirum, and I’d had a good listen to a CD the previous week. So I found the work reasonably familiar, the repeating themes and the lines moving through the SATB chorus, and the occasional harmonies amongst the solo singers. Interesting also to hear Latin as a sung language, although it’s not surprising given it’s a mass.

Obviously, there were some weaknesses. I guess the soloists are paid, but the orchestra is a community orchestra and thus hobbyists, even if committed ones, and so is the choir. The NCO’s intonation was occasionally suss, and the instrumental balance was presumably subject to availability (poor Elizabeth Collier had a hard time as the one double bassist and I could seldom make her out). A bit more confidence all round would have served well and given a less reticent performance. But I admire the obvious work and the performance and the orchestra itself. We are blessed to have such institutions. I felt very comfortable with the four soloists, and particularly enjoyed the four intermingling lines later in the piece. They were capable and well voiced. SCUNA was also impressive. I felt their performance had a clarity and passion worthy of the piece. I wonder if they also suffer from a lack of balance. Lots of sopranos and altos, but fewer basses and even fewer tenors. They tell me that tenors are notoriously hard to find.

It was a wonderful night. The music was pleasant and popular in the first half and profound in the second. The musicians and singers were capable and committed. And the audience was on side. The ANU Choral Society (SCUNA) and National Capital Orchestra were conducted by Philip Hartstein at Llewellyn Hall in a program called the genius of Mozart, featuring Mozart’s Requiem. The soloists for the arias were Rachael Duncan (soprano) and Benjamin Connor (Baritone). The soloists for the Requiem were Pamela Andrews (soprano), Ellen Malone (mezzo-soprano), Robert Shearer (tenor) and Daniel Brinsmead (bass).
Posted by Eric Pozza at 6:42 pm

I thought the mezzo, Ellen, was far superior to some of the other soloists. It seemed a little disjointed for my taste, but overall, a good performance of some of my favourite music.

Thank you for posting this - a much more balanced view of the concert than today's Canberra Times review.

Thank you for writing a review which provides feedback that the choir, orchestra and soloists can take on board. I am happy to read that you enjoyed the evening. We did, too.