A mate described it as introspective, and I think the music of Matt McMahon is that. Matt is in Canberra for two concerts this weekend. The first was last night at Street 2 with later year students on bass and drums: Rafael Jerjen and Aidan Lowe. The other is tonight with Eric Ajaye. I’ve been watching Matt through a series of concerts. He’s here reasonably frequently now, given his gig as piano teacher at the Jazz School [PS. My mistake and my apologies due here. I've mixed up the two Matt pianists. Matt McMahon is from Sydney; Matt Thompson is the keys teaches at the ANU Jazz School. And their styles are quite different. MT is restrained; MMcM is much less so. Eric, Sept 2010], and he otherwise pops up in numerous different circumstances. He’s always capable but also understated, even minimalist, so somewhat difficult for me to comprehend. Introspection is not my musical style. But I felt last night I could understand him better. I had heard touches of it before, but some post-bop pieces displayed considerable fluency and inventiveness in harmony and an impressive ease with sequences through scales, that speaks of skills and perhaps classical background. I see he’s trained with Mike Nock but also with Peter Sculthorpe. I’m listening to tracks from his MySpace site as I write this, and it is introspection I hear, even beyond last night’s performance. 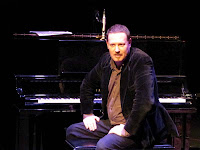 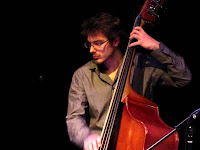 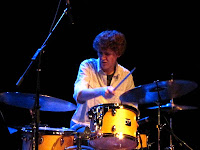 The gig started with a repeating single note on bass and piano in 6/8 with busy drums. It sounded of free jazz, but then some chordal movements appeared and we had a written tune. Time for a bass solo and those heavily improvising drums while Matt remained in the background. I thought waterdrops, given the light feel of Matt’s playing. Then Carl’s coat, referencing Carl Dewhurst, and another pensive piece called Ceremony. I was trying to decide just what ceremony it might refer to. Thoughtful and pensive: not a wedding, perhaps celebrating a birth. In the end, Matt said it was written after watching the Sydney Olympics opening ceremony. Matt spoke of how you try to write for a purpose, but something else comes. It was certainly more serious than are such public spectacles. I thought I counted 4-4-4-2 bars then 4-4-4 repeating: hardly the stuff of pop anthems. Heft followed, a straight 4/4 swing in modern style with a repeated 16 bar head. I enjoyed Raf’s walks on these faster swinging numbers. I guessed Raf felt most comfortable there. Given they’d only met that afternoon, I’m not surprised. Aidan impressed me as observant and very comfortable throughout. Nicely enriching the grooves; easily dropping into a more front line role when required. It looked pretty relaxed and easy, but worked nicely.

The second half started with a tune by Raf, For Leo, then another few tunes McMahon originals and a finish with Matt’s tune Relief, which was more introspective piano morphing to up-tempo modern swing. Matt showed his chops on the up-tempo with cascading sequences, irrespective of bar lines and such obstructions. A nice way to end the concert.