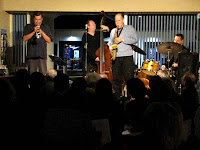 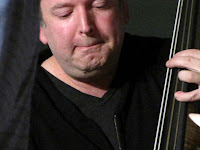 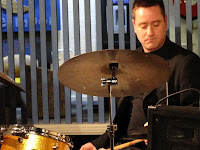 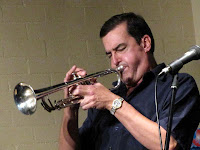 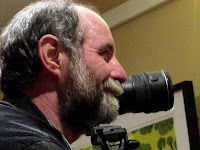 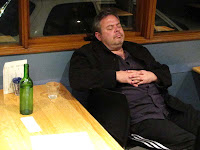 We hear tell of Bernie McGann as a key person in our Australian modern jazz heritage, with biographies in print and film. But he’s here, and very much performing with the same intent and his unique voice. We had a chance to hear it again at the Gods on Tuesday. Bernie came with his quartet: Warwick Alder, Brendan Clarke and Andrew Dickeson. This is jazz that harks right back to bop invention but speaks also with voices following bop. Bernie played standards that we recognised, but were none too common: The breeze and I and Memories of you and a tune by Dizzy. I’d mostly place his originals (Spirit song, Brownsville and others) in the post-bop tradition, with latin feels and strong walking swings, but that unique, haunting, impassioned alto sound is unique and renowned and easily recognisable. Band-wise, I was taken by a few things. Those fabulously easy and pure harmonies on the heads from Bernie and Warwick. The way Bernie would meld the melody and Warwick would follow so closely. The long, but never indulgent, solos from all the members, so that the two sets comprised only six tunes. Their incredible ability to hold a slow tempo and space feel in their version of Eubie Blake’s ballad, Memories of you: this was truly musical art. As a band, they sat or swung with ease, but also with conscious purpose.

Individually, they were wonderfully capable, of course, in solos and accompaniment. Bernie’s imploring alto that I mentioned above: mellifluous like honey, but not sweet; earthy as blown dust; ethereal as an unexpected shooting star; assured but allowing of doubt and ever forming, as true emotions are. Warwick was the other front liner, with a sinuous trumpet that merged so perfectly with Bernie on the heads, but veered into a very diverse style on solos. He was superbly defined in his statements, etude-like in his accuracy and clarity of purpose, precise in pitch and articulation. But I felt a real willingness to move the beat: well behind on some fast pieces for a bluesy authority, and over the beat for some ballads for a sense of urgency. His ability to form lines of eighth notes, then sixteenth, seemed unlimited: practised and precise, but never without purpose. That’s without even mentioning the way he grew each solo, controlling form and flow. Overwhelming trumpeting. Brendan’s just a war horse for swing with his enviable clarity of harmony and with never a passing chord missed. The notes weren’t unexpected, but they flowed with ease, and the expectation we had of each note was evidence of his skill. And then solos. One was truly sublime: a whole solo of double stops that was a thing of beauty. Others were more standard boppy outings. I noticed how they were quiet after the horns up front, but also how the audience was all ears to catch them. Andrew was the post-bop drummer: steady in time but busy; hard fighting and energetic; interjections that were more loud than sharp. Pushing his colleagues but ever ready to respond in kind. I felt Warwick particularly responding to his goading in solos.