It was a very different sound experience for me. I don’t often hear bassoon at close quarters, and I’d never even heard of a tarogato. But Niels had mentioned this to me, I’d got a Facebook invitation and it piqued my interest. It was nothing like what I’d expected, but then I really didn’t have expectations. 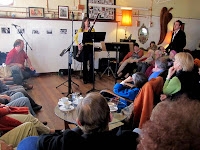 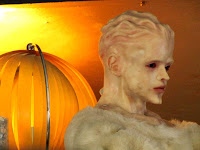 The session started with a Piazzola arrangement for bassoon, tarogato and soprano sax. I felt at home with this, especially with the bassoon playing what was essentially a bass line. Apparently, it was pretty much the baritone sax line from another arrangement. Then two Bach inventions for bassoon and tarogato. They were short but comfy enough. Then we started getting adventurous. Firstly, a difficult work in several movements by Ross Edwards called Ecstatic dances. The first movement was tarogato and soprano sax bouncing fast rising lines back and forth. Thereafter, some neat counterpoint. The Ross Edwards I’ve heard before sounds of the Bush, and, at least the first movement was nothing if not like flittering birds. Then another Ross Edwards called Water spirit song, this time on solo bassoon. Bassoons don’t lend themselves to bird flight, but this was bouncy to some degree, although more of an inquisitive animal than birdsong. Then two compositions by Ian Blake. The first was bassoon and female vocals (both by Zoey Pepper). Zoey had previously multitracked layers of voices and bassoons, against which she performed live bassoon and vocal parts. I had trouble with the balance and the recording didn’t match the purity of the live sounds. Also, I know no German, so the Rilke poetry just flew by me, as did the underlying story of Orpheus and Euridice. But some of the vocal work was particularly beautiful and I found it an eye-opener to the modern possibilities of echo and tracking and effects. I know of all this, of course, but to hear a classical acoustic instrument next to richly effected recorded instruments and voices obviates the new sonic possibilities we now have to play with. Then another Ian Blake composition for bassoon and tarogato. The concert ended with more modern effects: Col on effected percussion and Miro on trumpet improvising with tarogato.