I thought the three piece format - drums, sax, keys; no bass - was intentional, to underscore a different mix of players and a different sound. But _motion usually performs with a bassist; he’s just not been well and had to drop out of the tour. Their music, though, still ranged widely. They mention influences from jazz, contemporary classical, experimental rock and minimalism. The music was clearly from the jazz world, but there was evidence of more, especially the minimalism. The first tune on the ArtSound broadcast sounded common enough – a lively up swing of the 60s era with nicely striding solos from sax and piano then into thoughtful sax against a piano pedal, then out on a melody. Very nice. But then a minimalist balladic piece, and another piece with sax and melodica out front and soloing together. There was some bass backing here, perhaps a left hand on the Nord, but lack of a bassist was evident here. Then a few with piano that said 20th Century classical to me. The first was an original, but then a rendition of You are my sunshine, with a very nice, unadulterated melody on sax. Lovely. The second set returned to open balladism then a lively rocker called “Liberty stole my shoes” (interesting title). I was in the studio for this, and the band and especially drummer Hugh was obviously letting go on and there were some cheers of encouragement within the band at the end of this one. Then another ballad, and some impressionist piano to finish, clearly benefitting from the Yamaha grand in ArtSound’s studio. Pianist Berish commented on the piano, noting that it was nicely in tune. Knowing my battles with an acoustic piano at home, I can appreciate his pleasure. 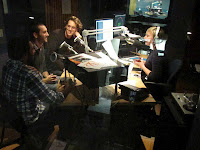 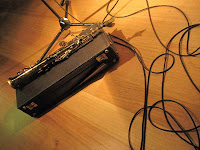 Andrew Brooks played with watery alto tone that fitted nicely with the ballads and the introspection. Berish Bilander had Nord and the grand piano at the ready. I particularly enjoyed his gentle solos that took advantage of the clarity of the grand. Hugh Harvey was more widely interpretive than I’ve heard him before and also let go with rocky energy on a few tunes. Interestingly, the band has Perth connections. I think I’m right to say they all (other than Hugh) met while studying at WAPA in Perth. They are now resident in Melbourne, and doing a short tour to promote their first CD, Presence. They return for two concerts next week: Tuesday at Front Café with Austin Bucket, and Wednesday at Trinity. These concerts feature Abel Cross of Trio Apoplectic filling in on bass. Catch them if you can. It will be interesting to hear, this time with bass.

For the ArtSound broadcast, _motion were Andrew Brooks (alto, soprano sax), Berish Bilander (keys) and Hugh Harvey (drums). Normally they include Nick Abbey (bass).
Posted by Eric Pozza at 11:39 am