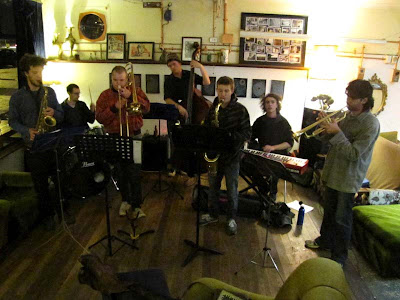 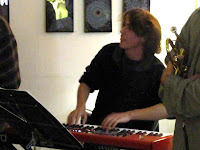 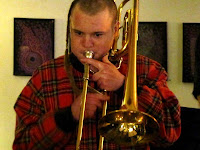 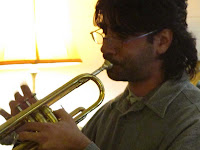 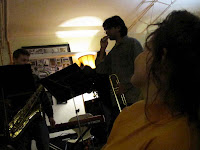 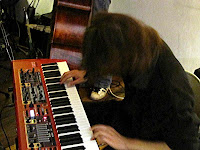 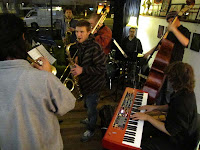 There’s always a touch of bent genius in the circus and often enough in composers. A challenge to the designed surroundings of Canberra and a rational APS. I was thinking this as I listened to Jono Lake’s Lakeside Circus. The music was all circus exuberance and jovial rhythms and riffs and bass lines, merged and manipulated and toyed with. Absurd, varied, jokey, malleable and entertaining. Entertaining: that word that musicians often forget at their own expense. Even between tunes it was a rollicking show. One tune was Candy Berry, obviously named for Canberra. Shouts of “I love Valium” and offers of solos “How ‘bout you … solos … [pointing]“ “Ready .. 1,2,1234”. This was loony tunes of the discordant harmonies. The out-of-tunality might sound like poor playing to uninformed ears, but it’s not like that at all. This is purposeful, but irony is the purpose. This is on the beat and square, boxy and tonally clashing, with just the odd touch of swing and sweet soloing to lighten the effect. This is not music to highlight performers, but music of composition. Jono’s the composer and concertmaster and performer out front (every circus needs performers). All excitement and urgent invention that dismays and constantly pushes his Circus. I noticed quotes from All the things you are and even Giant steps, but these are just that, quotes. The bebop as stride was more indicative of his style. There were mainstream solos from Max and Shane and John and Andrew, and some quite fitful but exploratory ones from Jono. But always that challenge to the comfortable and the overtly serious. Well practised to be rough as guts and hot as hell. I loved it. I tired a bit as the night wore on, so maybe it could have some more contrasting, tuneful interludes. I found the occasional break into a capable swing solo was a joyful release. But this was Mingus-like in the passion of the playing, and demands (even Mingal shouts) of the leader, the roughness and bluesy urgency and the playfulness. Refreshing, despite the demands it places on the listener. Lakeside Circus is Jono Lake (piano, compositions), Shane Spellman (trumpet), Andrew Fedorovich (alto sax), Max Williams (tenor sax), Patrick Langdon (trombone), Alec Coulson (bass) and Mark Levers (drums).
Posted by Eric Pozza at 8:06 pm

Wow - you're really into it! I admire that! I'm a jazz student, and while I've come to just love jazz in a lot of its forms, I often wonder what the heck I'm doing, practising away for hours, while there are really not so many people interested in it...
Mary, www.finedaysforanybody.blogspot.com