When the sky cries rainbows

It’s always good to hear Sandy Evans, but this night was special. The evening started with a set from her trio, comprising Brett Hirst and Toby Hall. This was wonderfully impressive playing on a range of tunes. A few po-mo-influenced modern pieces that were ironic and entertaining platforms for some great soloing. The first was the night’s starter, Hungry Head Shuffle, with its loping jollity and wildly syncopated bass and open drums that moved into interrupted walks and otherwise played with sparseness. HHShuffle morphed somewhere during solos into Mountview. Then a raga played initially by Sandy on soprano sax against a sitar-like drone from what is presumably the Indian equivalent of a drum machine. I was surprised to hear Brett on bass soloing here, but it was informed and apt. Then an end with unison instruments playing a devilishly difficult head. I’d heard this raga before, when Sandy appeared at the Gods with Citizens of Earth. Technically, it’s mostly Phrygian, but any note is playable subject to some rules of repetition, so some notes can only be played once an hour. Sandy warned we wouldn’t get to these notes. The last tune was back to po-mo fun and Toby controlling solos with a whistle. James Greening came on for this tune and he obviously enjoyed the humour of it all, but it was also hot soloing. But for all this great playing, it had nothing on the second set. 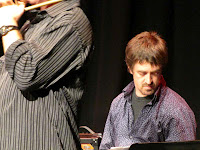 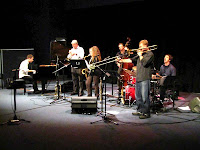 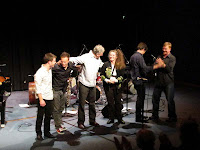 “When the sky cries rainbows” is a suite by Sandy lasting about an hour. I can write of it, but I didn’t take notes and its beauty and seriousness really have to be experienced. It comprises around a dozen pieces or themes that tell of personal tragedy around illness: the shock of diagnosis and coming to awareness; changing moods, depression and optimism; the journey to dealing with a major, irreversible illness; the strength of the ill person and the relationships of husband and wife in going through the experience. The rainbow is a symbol of hope, and the journey is ultimately hopeful but it’s an honest view of the strongest of emotions around despair and resignation and acceptance. Sandy’s trio was augmented by Miroslav Bukovsky, James Greening and Luke Sweeting for the work. There was a good bit of reading, and it’s not something they knew intimately, but the band played it with passionate embrace. I was stunned by Luke’s maturity in several important piano parts. By Miro’s beauteous strains of trumpet played to resonating piano strings. By James’ virtuosic fluency on trombone in various parts. By Sandy’s intent and honesty and openness, to speak nothing of her playing. By the congruent playing by Brett and Toby. It was not a large crowd in attendance and the music had some roughness from last minute learnings, but this was a work of honour and honesty and profundity that is rare in any medium. It was one to savour with closed eyes and sturdy emotions. If you get a chance to experience this, don’t miss it. I recorded so it should be on ArtSound’s Friday Night Live in the next few weeks or months. Keep an eye out for the broadcast and stay in for the night.