What a news day!

Ben Panucci was a restrained interlude amongst all the other happenings of the evening, although I didn’t realise it until afterwards. I arrived home after one set to find there was a Labor Party spill in progress. Megan arrived home to say she’d been at a restaurant in Kingston with Bill Shorten at the next table and that something had obviously been happening: TV cameras waiting outside, and Shorten and mates with mobiles to their ears, even one mobile per ear. Thus is the way of Canberra on these big political days: you can often catch the action if you’re out for dinner in Kingston or Manuka. Also, the story of McChrystal being rolled by Obama after his very unfortunate comments getting through to Rolling Stone mag. And then the Australian World Cup Final game against Serbia to come at 4.30am the following morning. And overnight at Wimbledon, the longest tennis game ever! It was 59-59 in the fifth set when it was stopped for the day, after over 10 hours. The final set alone was over 6 hours by then. All go! 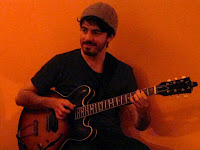 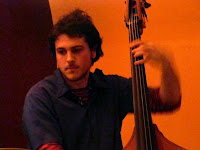 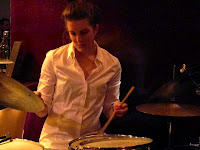 Ben Panucci was relaxed and comfy next to all that. Ben’s style is pretty quiet and thoughtful anyway. Clear tone, lots of chordal work including on solos, quite a few fast lines, mostly diatonic, although occasionally descending to the nether regions of dissonance. Sam Dobson was clear and solid in support, and had a good run of generous solos. Trios leave plenty of space, of course. I enjoyed his clear chordal statements in solos, mostly against standard harmonic structures. He was strong, too, loud and out front. That was partly because of Jodi Michael’s quiet drumming. She was busy filling the spaces and adept at a percussive patina that enriched the sound and I particularly enjoyed a later solo when she drastically mashed the time, but I didn’t hear her as particularly driving or forceful. That may be the style that Ben’s seeking: a crisp guitar, neo-swing style, if there’s such a thing.

There was some very mainstream swinging, but “I’ll be seeing you” developed into a passage with bass pedal and busy, ethereal drums supported a very dissonant guitar. Benny Carter’s “When lights are low” was just plain delicious swing. They also played originals which were again restrained but more modal in style and interpretation. I remember one that started quiet and spacey with staccato guitar notes leading to a chordal solo passage. Less commonly, they also played a Bob Dylan tune. I like to hear pop tunes treated in jazz - after all, the standards were pop tunes of their era - but I found these I-IV-V chords just too limited. They band played with time and interplays, but there wasn’t much underlying complexity to work with.

So it was quite a memorable night when Ben came to play in Canberra. Ben Panucci (guitar) played with Sam Dobson (bass) and Jodi Michael (drums). Bill Shorten, Kevin Rudd, Julia Gillard, Barack Obama, Stanley McChystal, Tim Cahill and others had bit parts.
Posted by Eric Pozza at 9:15 pm