Out of the West

It was cold outside, and it must have kept most punters away. Too bad, because the Tom O’Halloran Trio were hot – complex playing, lots of fast unison lines, interesting solo passages but supported with the fluidity of a band of equals who bounce freely off eachother. The members of the trio have been dispersed recently (Tom in Sydney, Peter in Perth and I think Daniel was in Hawaii) but they had the feeling of musicians who know eachother well. Their history includes a few CDs and lots of playing together in Perth. The tour must have refreshed their musical relationships, and it was impressive. 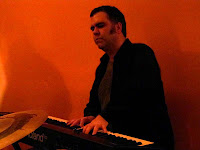 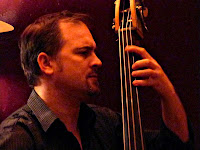 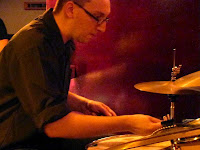 This is a modern piano trio, so there’s lots of space for each member to perform. Style-wise, I heard 1960s Corea several times, but there was a fabulously exciting and authentic latin dedicated to Gonzalo Rubalcaba and some piano mates were hearing a range of influences. The first tunes felt calm and undemonstrative in their steadiness and ease of performance, but there was still an underlying liveliness and intensity. By the time of the latin at the end of the night, the masterful control and musical freedom was still there, but the band was hotter, the volume was louder, the interactions were more intense and sharper. But it was always the intense interaction and the group performance. Also impressive was the composition. The tunes were presumably all originals. There were a few simpler chordal structures, but more common were the devilishly difficult unison lines from piano and bass, and the complex ostinatos behind drum solos that must have been written. And no charts on show, so the tunes were all well assimilated.

Tom was easy and inventive in his improvisations, ranging widely, sometimes toying with the keys with scalar runs, sometimes playing the most complex of extended chords, but responsive and malleable in his statements. I noticed how he watched the others, obviously comfortable without needing to watch the keyboard. Peter was accurate in intonation and sharp with melody lines right into the thumb positions. I noticed some beautifully formed classic handshapes on the fingerboard (bass players stretch the index finger up from the other fingers which are perpendicular to the fingerboard, although jazz players are more lax than classical). There were some excellent solos with lines that were considered and not too fast. Daniel was busy, supporting but also highlighting or contrasting with sharp snaps or soft cymbals and rich dynamics. He also showed a readiness to play across and through the beats: I was stunned by some sustained polyrhythms. His solos seemed to become more common later in the night, culminating with a beauty on the final latin tune with snare off for a timbale effect. The small audience may have been a bit dispiriting and Tom was easy-going although not particularly talkative, but there was good cheer in the band, and they was happy to chat in the breaks. So, it was serious playing and a seriously impressive performance, but a casual event. It was a beauty; too bad if you missed it. Tom O’Halloran (piano) played with Peter Jeavons (bass) and Daniel Susnjar (drums).
Posted by Eric Pozza at 9:37 pm