Fever in the freezer 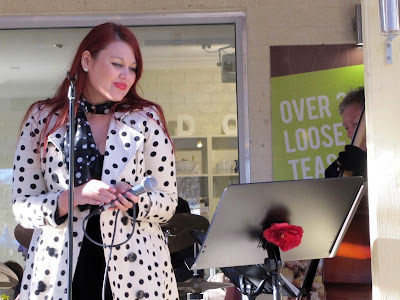 The predictions were for a cold weekend (Min -3C, Max 12C. Fine, early frost) and we were playing outside, even if undercover. I was dreading freezing up with cold hands on my double bass. But in the end it was sunny and free of breezes and the fingerless gloves did their job. Quiros Street Collective played Adore Tea with a singer this time. I like playing with a singer. The tunes settle better, the less that is more is much easier to achieve, and the message or wit of the song is manifest. It just feels as it should be, voice being the personal and human thing that it is. It suits gigs like this, too. The public connect with a singer in a way they don’t with instruments. Instrumentalists have their own technical fascinations and a closeness to pure sound and can forget that most people don’t share this fascination. They see the band as just the support for the story teller, the singer. And fair enough too, if they are your interests. Of course, venues often feel the same way, because their customers like songs, especially ones they recognise. So it was when we played. 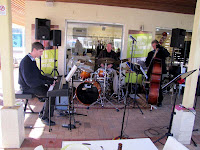 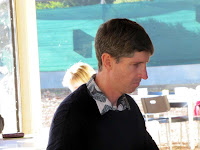 Monica Moore was singing. Peter plays with Monica in a local pop band, but she also enjoys the jazz standards and the malleable structures of jazz. Musicians sometimes reject standards in the search for originality. That’s OK, but the standards remain huge markers in the jazz tradition, examples of the very best of song-writing, and people who play them seriously argue for their capacity as training vehicles. Whatever, I just melt with the beauty of some tunes, even if their ubiquity can make them seem kitsch. Nothing particularly unusual, but we had a great time playing tunes like Georgia, The look of love, Secret love, Recordame, Summertime, You don’t know what love is, Joyspring, Fever and the like. Nothing unusual, but every one a long established work that was closer to its original purpose due to the vocals. Thanks, Monica, much enjoyed. We’ll do it again.