They were the Translators and they performed at the Gods the other night. It’s an apt name for an unusual mix of instruments that produces a very recognisable and attractive outcome. It’s seldom that I attend a band with electric mandolin, especially one that’s screaming like a Strat, or Spanish guitar played in classical cum Flamenco style, but that’s what was on stage, and it worked comfortably with the sixteenth note grooves from electric bass and the lively drumming. An unusual combination but still with affinities: with Jaco for those bass chords and funky grooves and exquisitely mellifluous bass melodies and with Al Di Meola and Paco De Lucia for those nylon strung Spanish guitar sounds. Even the mandolin had references. The fast lines, high pitches, sometimes screaming sounds with overdrive and echo sold it as an instrument with attitude, sounding eerily like studio-based indie guitar soundscapes. 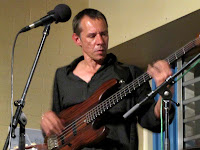 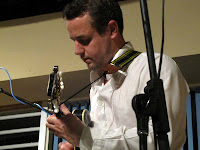 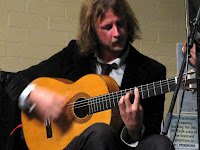 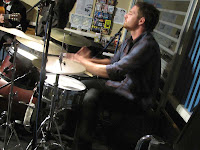 The elder of the band was Steve Hunter. Steve’s a master electric bassist and wonderful to hear: a great, phat sound; rich and varied chords and fingerstyle sixteenth note funky accompaniment; sweet melodies and some devastatingly fast falling lines. Ben Hauptmann was on the electric mandolin: from sharp and thin mando lines to fast guitar-like solos to complex and richly effected soundscapes. Brother James Hauptmann was on drums: not showy, but strong with busy grooves that grew naturally to peaks with the solos. Damian Wright was the Spanish guitarist. The nylon sound is recognisable (you hear it often enough from players like John McLaughlin, perhaps played with a plectrum) but the style places the band outside the mainstream. This is thumb plucking, fingernail strums, fingerstyle chords. There was some jazz sensibility in the left hand, but the right was in another space altogether. Very capable and perfectly fitting to this context, but still quite unexpected.

The tunes were originals by various members: Flamenco influences, two chord funky solos, rapid unison melodies, unexpected and dramatic starts and stops. This was energetic and lively music, tons of runs, tons of cleverness and overt Latin passion. At one stage, Geoff Page mentioned that Steve was the bassist who convinced him of the authenticity of the electric bass. It’s easy to concur on Steve’s expertise and musicality, but this night was not just Steve. The performers presented an odd mix of instruments, and a style that we are aware of but that’s not common on the jazz scene in Australia. But it’s infectious and lively and I, for one, would easily hear more.