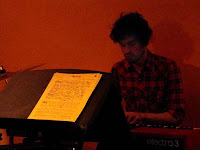 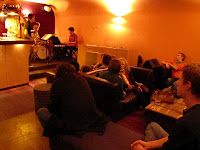 I’d caught Brother Bill a few days before; this was a night for younger sibling Max. I’ve heard Max a good few times, but I think this was the first as band leader. He’s a thoughtful player - well considered phrasings and content to play slowly and let the notes lead, although he’ll also let go with occasional flourishes. I particularly enjoyed his harmonic concept in a challengingly out tune by Simon called Two forms of liquid. Underlying were Rhythm changes, but the melody was contorted like Monk. Max wasn’t madly comfortable on the melody (he was reading and it would not have been an easy read), but carried the tune off well with plenty of challenging scales and appropriately long intervals and dissonant extensions. Simon backed with fairly straight chordal statements which held it together, then a simple repeating descending chromatic line, then soloed with a strangely minimal statement that moved in triads through changing harmonies. It was very much conceptual rather than virtuosic and apt for such an iconoclastic piece. Otherwise, the band played lively latin that sat nicely with a mobile flow of unadorned chords. Also a few standards: Airegin by Sonny Rollins and Skylark come to mind. It was in these that I noticed Andy’s bop solo phrasing that flowed in long lines over the barlines and ended in little twists: easy and consistent. Aidan sat easily with the various grooves, and showed his individuality with a solo on the latin, but also some amusingly corny responses in Simon’s Two forms… It was an easygoing night and a casual performance by students for fellow students. Nice one and thanks to Other Brother Max. Max Williams (tenor) played with Andy Butler (piano), Simon Milman (bass) and Aidan Lowe (drums) at Trinity.
Posted by Eric Pozza at 8:27 pm