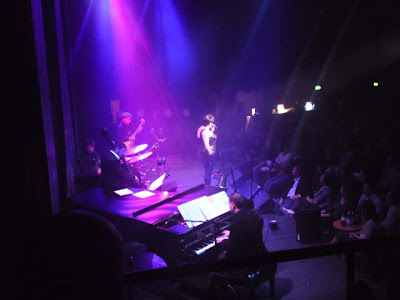 Nestled in the bowels of the Opera House is The Studio, the perfect venue for variety show Late Night Lounge. Comedy, cabaret, death defying stunts, magic and good wine is the order of the night. Eclectic music accompanies many of the performances – folkish music, tongue in cheek rock and modern lieder with a gothic twist keeps the audience challenged and smiling. Intriguing for music lovers is the House Band – read whoever’s in town. Tonight we were treated to jazz musicians Matt McMahon, Jonathan Zwartz, Carl Dewhurst and drummer Evan Mannell. I wasn’t expecting to see so many top-flight musicians earning their crust in such a variegated fashion. Mannell certainly had the best view for a number of notorious acts – he kept the beat while stockinged buttock cheeks flapped in his peripheral vision during a voluptuous rendition of Turn Back Time. His concentration and courage should not go unrecognised.

The House Band under the direction of McMahon accompanied guitar duo Dog Trumpet – Peter O’Doherty and Reg Mombassa, founding members of Mental as Anything – as they plied their original material from 2007 album anti-social tendencies. Zwartz executed a rollicking bass line while Dewhurst added texture on the third guitar. McMahon has great dynamic sense, knowing when to bring the piano into prominence and when to fade it into that zone where it can just be heard.

In the interval the intimate cabaret action turned jazz club; while patrons procured more champers and beer, the house band played Nostalgia in Times Square. How many people in the audience knew what they were listening to? Such is the nature of jazz that it can add atmosphere, class and communicate directly with people who prick up their ears at such moments. A sharp nine chord can draw the attention of someone waiting at the bar, while a pentatonic run can just as quickly sooth them back into complacency. This laid back style of jazz is perfect for encouraging the audience to mingle, chill and prepare themselves for another descent into heavenly seediness.

If you want to be surprised, shocked and lulled by the beauty of midnight song, get tickets to Late Night Lounge – they sell fast – and be entertained by the sheer (literally) variety of song, dance and provocation that takes place every month under Sydney’s iconic ‘House’. You never know who will turn up, and it’s a good place to see what musicians do best – getting a pile of sheet music and told to play, swing and rock.
Posted by Eric Pozza at 7:51 pm