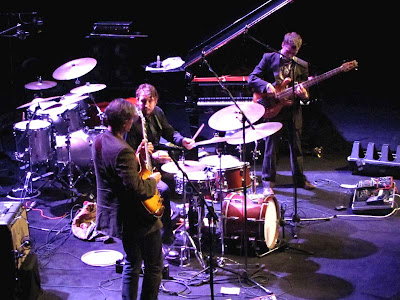 The Drips were the backing band for Ahmad Jamal. Drips? I’d noticed the name in emails or on Facebook recently, and immediately recognised Carl Dewhurst, Cameron Undy and Evan Mannell when they stepped on stage. 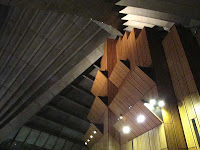 It was a strange concert, in line with the band’s self-demeaning name, and no doubt a challenge to all, even if it was strangely apt for the AJ support. Apt because they were taking AJ’s rhythmic contortions to logical and extreme conclusions. There was groove here, but the band was expertly avoiding the beats to create the strangest of twisted, contorted patterns. Not easy, perhaps not even pleasant, but fascinating and very difficult ot perform. There were occasional chromatics and harmonic contortions, too, but I felt the key was the rhythmic perversity. What else? A parallel self-demeaning (although confident) introduction about this being their biggest gig (for The Drips, perhaps, but these are capable and busy players otherwise); some very capable guitar solos, although again twisted; bass pleading and leading and sometimes bleeding, with massive distortion and richly effected tones and odd chords and even thumb positions (on e-bass?); perverse and delayed rhythms, which provided an essential drumming context. Suffice to say, all very strange and perverse, but also fitting and expertly done. Feel up to it? Check out what the Canberra contingent (Cameron and Carl are local Canberra products) is doing these days on the edge in Sydney.

I enjoyed the drips although it was certainly different. A very brave move to play this kind of music to a crowd waiting for Poinciana.