Out of the woodwork

I’m constantly amazed how musicians keep coming out of the woodwork – good ones; capable ones. Yesterday I heard Linda Tinney’s band, Blue in Red, at the Yacht Club. Linda and husband Graeme have been in Beijing for the last few years, but before they left, they were one of the first reported bands on CJ, and I used a pic of their band, Zip, as the header for the site. So Linda has a place in CJ’s history, and I was interested in hearing her again. But Linda’s accompaniment were all new to these pages. 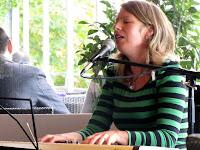 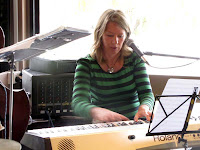 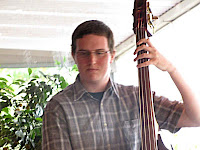 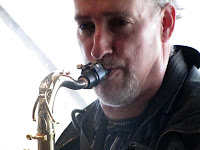 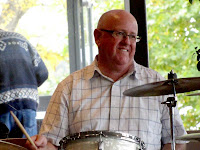 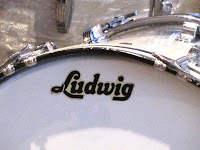 Linda was up front on vocals and piano. It’s a blues-infested gig that this band plays, although with some jazz training and sensibilities. Linda carries the show off with lively good will and an easy interaction with the audience. It’s a great skill, and makes for good entertainment. The tunes were well chosen and diverse, too. Famed ballads for the mellow times, like The nearness of your and Time after time, lively swing standards like My baby just cares for me and I got rhythm, soul and R&B including the Aretha Franklin’s spine-tingling People get ready, some funky earthy New Orleans grooves, and a few originals. Linda’s lively but also committed in voice: closed eyes, plaintive high notes, well formed phrasing, emotive dynamics. She’s similarly rollicking and solid at the keyboard, although there was a more subdued touch in the ballads. But overall, this is the blues, and there’s emotion a plenty on show. I loved it and I was not alone.

Graeme usually plays bass, but had done himself some minor injury so Jared was in his place on double (from Melbourne luthier, Ross Anderson) and electric basses. He’s currently at the Jazz School and has some previous classical background, so he had chops aplenty for some nice fills. He also played a mammoth e-bass solo that was nicely done, although perhaps a bit challenging for the blues format. I enjoyed Jon Jones’ drumming. It just sat so nicely with easy temperament: nothing fancy, but spot on. I’m sure I’ve seen him with playing with Annie’s Armadillos, but he’s not alone there. And nice to see the old Ludwig label. Ringo played Ludwig and it was a big name in the past; not so common now. Another new name for me was Demetri Neidorf. He played a range of saxes - soprano, alto, tenor - and I hear tell he can put his chops to a range of other instruments, too. His playing was subtle and effective, soloing easily and very capably, dropping little fillers at apt times, even swapping saxes for effect at different times during a tune. I read this as very mature performance, restrained and nicely in place. Dimitri plays in Word made flesh, a band I must catch for a report sometime.

Blue in Red was infectious with life and vigour and musical competence; not formal or intellectualised, but great entertainment and a pleasure to spend an afternoon with. On the day, Blue in Red was Linda Tinney (vocals, piano) with Jared Plane (bass), Jon Jones (drums) and Demetri Neidorf (saxes).
Posted by Eric Pozza at 8:56 pm