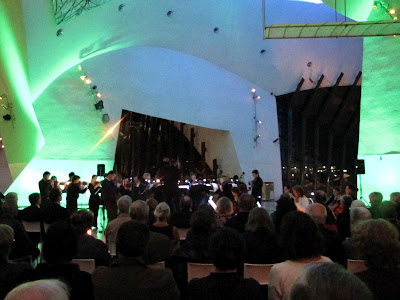 It is with respect and some shared sadness that I write about the performance of Henryk Gorecki’s …songs are sung… last night in the foyer of the National Museum. The request that the audience not applaud was indicative of the gravity of the event. Gorecki wrote this piece in memory of Poland’s World War 2 experiences and the aftermath, then held it back for many years before finally allowing it to be premiered by the Kronos Quartet. This performance was claimed as a “premiere performance … for string orchestra”, presumably for this arrangement. The Polish Ambassador set the scene by reminding us, if necessary, of the harrowing contemporary history of Poland, the memory of the Katyn massacre and the recent loss of a large number of the political class travelling to memorialise that event. So this was not a performance to be treated lightly. It wasn’t: a quiet and respectful audience, candles, heavy and deeply moving music. 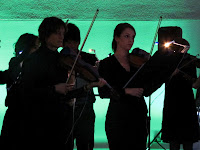 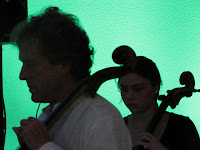 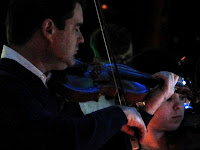 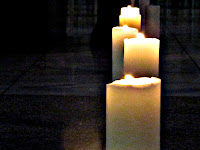 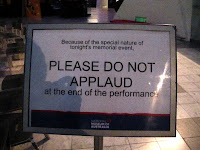 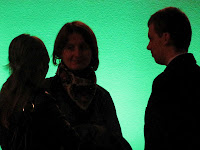 The piece is in five movements lasting about 45 minutes. A goodly number of strings (I judge by the number of double basses: there were four) and a string quartet. I didn’t particularly notice the quartet in physical layout or in the music (other than a key cello part at the start of the fifth movement). I notice the program says the quartet included Max McBride on bass. I didn’t see Max but he may have been there. Bass would make it an unusual string quartet and no parallel to Kronos. The musicians performed in silhouette with candles, and I was down the back and had eyes closed most of the time. You couldn’t listen to this concert with your eyes. The music was often contemplative with long notes on deep bass and cellos. There was a hint of leavening at times, with simple and pleasant major lines, but they inevitably fell to a flattened note at the end for minor key sadness. Each hopeful line cut off after the shortest of possibilities. Brooding music, telling of people who know their losses and are pained by them. Not a music of ignorance, but of occasional hope being promptly and reliably trampled and low volumes speaking of self-preservation in a hostile environment. But it was surprisingly not music of resignation, more of the recognition of horror and of survival. Both profound and memorable.

Coincidence. I was listening to Radio National as I arrived at the National Museum. An Iraqi was comparing Iraq to Poland, saying they had similar, tragic experiences due to their geography, both being located between power blocks where armies pass through. I’m an unrestrained rationalist, but I admit to the unnerving coincidence.

Gorecki’s …songs are sung… was performed by the Canberra Camerata with the NZ String Quartet.
Posted by Eric Pozza at 8:09 pm