That’s how I saw Ahmad Jamal and his band at the Opera House: playfully dynamic. Lithe, joyous rhythms oozed from these guys. Ahmad’s in his 80th year, but you wouldn’t think it. He’s lively and mobile, joyous and swinging, adventurous and modern. A mate Peter observed that his playing was not bop, but wilfully chromatic. Not just chromatic, but adventurous in conception and rhythm and dynamism. He had an intimacy with tunes (not least with his theme, the lovely Poinciana) that allowed him to toy with, even mangle, the melody or the chordal movements. This was the dynamics I mentioned. He’d move way, way from the tune, he’d twist and prod and delay, and play 9 over 4 or 15 over 12, but he was always there, always ready for that sweet resolution. 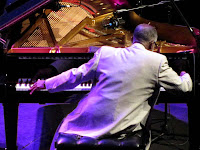 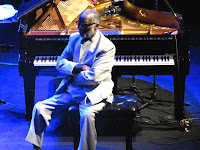 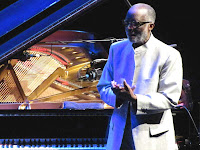 His band was similarly comfortable, as they sat with great comfort with the tunes. These are players that have a long history with Ahmad, and the joyous smiles and open eyes and easy responses confirmed this ease. There was a cohesiveness, especially between bass and drums, that was manifest. And, on top of that, the waving hand of Ahmad mixed and matched to orchestrate the whole in real time, now a drum solo, then percussion or bass. It’s not something I’d seen quite like this before, and it was effective. A Jamalism, I guess.

I loved the bass playing by James Cammack, which was mellifluous in its grooves and fills and beautifully close in accompaniment. Great playing, although the business card action he must have on his bass made for an edgy sound from strings that couldn’t vibrate freely. That’s the cost of this fast and fluid style with very low action, but I loved it none-the-less. And you’ve got to like a guy with such a big, open, joyous smile. Herlin Riley was a favourite of Ahmad, getting lots of Ahmad’s calls for solos and fills, and also a favourite of many muso mates in attendance. Again, that big smile, and I felt the strength that set the rhythm section. Unexpected on the night, was the appearance of Manolo Badrena, master percussionist. He was off to one side, and somewhat out of the core of the rhythm section, adding constantly changing colours and a little humour to an already joyous band. His was not a role of adding complexity to a groove, although we did get little snippets of congas and bongos and timbales that did provide that rich contrast with the drums. Not that, but rather colours and textures from short, constantly changing blips of percussion that moved through and around the rhythm and Ahmad’s endlessly changeable piano. His vocal percussion was interesting too, often raising a smile and adding the humanity of voice to the blend. 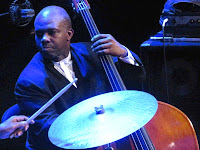 The band played tunes from recent CDs, mostly groove-based, some with odd times or odd divisions of time or decisive starts and stops. Otherwise, there was the signature tune Poinciana, a wonderfully inventive and disguised version of But not for me (my favourite of the night, I think), and tunes by Sammy Davis and Jimmy Heath and perhaps others. They played a string of encores when the audience exploded after an evening of intellect and good will and open joy. This was a concert to remember with pleasure. A sprightly aged but not old man, with obvious life to spare, a group of comfortable colleagues and a string of sharp and infectious grooves and intelligent but loose dissection overlaying it all. A wonderful and very special concert.

A great review of a wonderful night. A lot of love on stage and in the house. I saw Ahmad in 2003 with his then trio including Idris Mohammed however Monday nights performeance was on a much higher level. Hard to believe that Jamal is in such fine form at his age. One of the best gigs from an os performer I've seen.