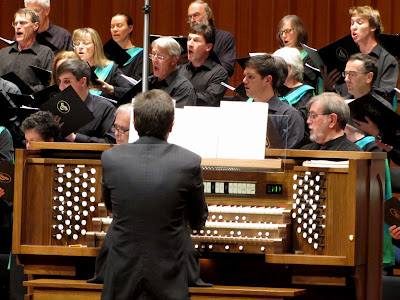 Fifty years ago, Canberra was a town of just 15,000. But even that mini community could form a choir, and this choir continues today as the Canberra Choral Society. Even more amazing is that this amateur choir is now sophisticated enough to perform a range of choral works of high calibre and to justify a Sunday live broadcast to ABCFM. So it was this weekend: Easter weekend. I’ve written here about the wonderful Messiah I heard before Christmas from the CCS. This performance was a much less known and more varied program, with limited musical accompaniment, about 100 singers, and with up to 8-part harmony: two each of sopranos, alto, tenors and basses. Interestingly, with voices interspersed, rather than in blocks. 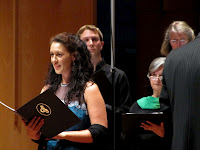 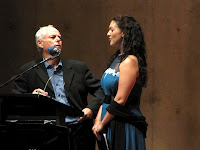 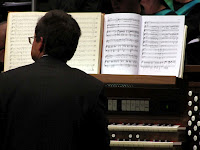 The performance lasted about 1 hour, and was formed of 4 brackets, each of two, three of four tunes, of radically different eras and styles. Bracket 1 was Britten and Bizet. Bracket 2 was Monteverdi and others of that era, along with a modern piece, Araluen, by Matthew Orlovich. This bracket was performed without organ accompaniment. Bracket 3 was disarmingly two songs in the American gospel tradition, also with virtually no accompaniment. Bracket 4 was Mascagni and Vaughan Williams. The recurrent theme was Easter, with two Te Deums (Britten to start the program and Vaughan Williams to end it).

It was not something I feel competent to comment much on. I noticed a good swing feel in the third bracket, which surprised me, but these are modern people so have inherited a feel for swing. I felt even 100 voices or thereabouts only just filled Llewellyn Hall, but it’s a big space. I liked the new electric organ that sounded big and true. I loved Karen Fitz-Gibbon’s solo soprano voice, which soared with incredible clarity and beauty, even if it got lost just once or twice. She’s an honours student at ANUSM, and looks like she has a future. And the music, although largely unknown to me, was a fascinating mix of eras and styles, and worthily presented by a surprisingly capable choir. Just another unexpected wonder of this little town, and not the only choir of note.

The Canberra Choral Society performed at Llewellyn Hall with Peter Pocock and Tobias Cole conducting and with Karen Fitz-Gibbon (soprano) and Peter Young (organ).
Posted by Eric Pozza at 9:43 pm