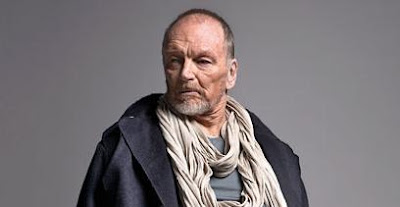 King Lear is, of course, at the intellectual forefront of the western canon, so it was both a duty and a pleasure to see. John Bell is now of the appropriate age and is playing Lear for his third time. He talks of coming to a greater understanding of the play, given his experience and years. I felt comfortable with Bell as Lear. But it’s a complex plot, and even though I knew the basic plot and had seen several movie versions, I still found I was struggling to follow the details. My ears aren’t the best and I had to concentrate to just to catch the words, let alone think through their import in the first half. Sometimes there was percussion accompaniment; sometimes the enunciation or volume was difficult; at one time the voices were amplified over loud percussion, but they were distorting with a too-high gain setting. The second half was much better. Perhaps I’d settled into the middle English by then and the plot lines were resolving, so I knew what to expect. Whatever, the ending was easier, more like how I’ve found Bell Shakespeare to be in the past.

I left knowing that this was a great work but feeling somewhat unmoved. I’d eaten with some friends a few nights before who were iconoclastic enough to admit that they could take or leave the Parisian masterpieces, that visual arts just don’t do it for them, even the uberpop impressionists. I felt something like this. There’s obvious profundity there, but it’s distant from my experience. I couldn’t accept Lear’s anger with Cordelia in the first scene, and I equally couldn’t warm to Cordelia’s strangely punctilious and distant response to her father’s demands. OK, she was being true rather than obsequious, but too teenagerly literal in it all. Why not just humour him? Similarly, I found other responses were too extreme or unlikely. And then why the soppy characters winning in the end; how come the change in simple, honest Edgar to warrior superman; OK that the scheming sisters fell for the lithe and naughty Edmund, but would the honourable Albany really have been married to the tyro Goneril? 100 to 50 knights was OK but the drop to 25 and then 10,5,1 was too sudden. Cordelia just didn’t seem young and frail enough, and I didn’t quite catch the intent of the all-important letters. It’s a busy plot and nicely mirrored with the two misunderstanding fathers, but it takes considerable comprehension to follow the details. The plucking of Gloucester’s eyes was harrowing (but I’d seen worse in Titus Andronicus at Stratford on Avon). In the end, the stage was littered with three sisters and the bad son Edmund, and then Lear drops off, as becomes a tragedy, leaving a few admirable characters, Albany and Kent and Edgar.

Gigs can be lonely and distant for a band, and so I like to hoop it up a bit to show some involvement and support. Theatre isn’t quite like that, but at least a few chuckles for jokes or gasps for particularly distressing scenes can be expected. But the audience here was strangely quiet, as if they were having the problems I was. We value this great work, but we don’t particularly understand it or assimilate it. So in the end, Lear was a strangely truncated experience, not due to the play but rather to the audience and our distance from its world. Now, will I get any comments for this post???
Posted by Eric Pozza at 8:01 pm