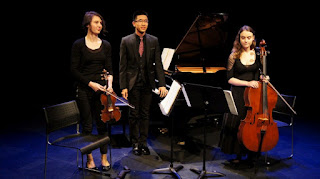 BJ Gilby had a busy week: CSO on Wednesday and Thursday; practising with NCO on Friday then performing on Sat; finally performing again on Sunday. Maybe others had it so busy and maybe that's the life of a professional muso, but I understood the busyness of that program. Music like this takes preparation, it's not just a matter of turning up to the job on the day. Only Barbara knows the other work put in behind the scenes, to learn parts and to rehearse various groups. I just know because I attended four of these events: CSO Thurs; NCO practice Friday; NCO performance Saturday; Romance & Revolution Sunday. R&R was one of a series of concerts in the theatre at the Tuggeranong Arts Centre. This concert was two groups playing two works: Shostakovich Piano trio E minor Op.67 then Mendelssohn String octet Eb major Op.20. Chalk and cheese, really. 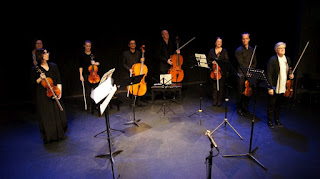 The first was heavy, post-war, influenced by loss and tragedy; the second was lively, the work of a 16-year old (!), joyous, busy, alive with hopes for the future. It's not surprising that the first was played by young performers: Aaron Chew, Helena Popovic and Olivia Thorne; youth often takes on the big thorny issues. The second was performed by the seasoned professionals. It's sometimes thought that older generations have seen and digested loss and survive notwithstanding. Whatever, the older group played the lighter music, busy and complex as it was. I much enjoyed the 1944 Shostakovich for its Jewish folk themes and frenzied dances. This was a modern piece that came alive to me with this rendition, just three parts, clear and well spoken. The Mendelssohn presented as two string quartets arrayed side to side but this was far more complex than shared parts from mirrored quartets. There were lines that passed throughout, harmonies shared and played with, at one stage an endless line played in harmony throughout. This was youthful, joyous, energetic and the octet played it with charm and understanding. So this was two halves of an unmatched orange, but fascinating for that very thing. Great playing throughout, intimate and close (we were in the front row), diverse and inventive. Great little concert.