For me it was Llewellyn 2, my second performance in Llewellyn Hall. For everyone else it was Llewellyn 3, National Capital Orchestra playing Beethoven's Triple Concerto with our soloists Barbara Jane Gilby, David Pereira and Edward Neeman, with a featured extra work with Stephanie Neeman. The rest of the program was Haydn Symphony no.49 "Passion" (named by his publisher but reasonable enough; apparently his only symphony in Fmin) and an intro with Beethoven Fidelio Overture. The four-handed Neeman performance was a little extra, not requiring orchestra and using the Steinway readied for Beethoven: Martin Wesley-Smith My brother Jack. I spoke to Edward about this after the concert. It's a work in 17 (12-5) with canon-like melodies from each performer (perhaps each hand) featuring snippets from Frere Jacques. No wonder this was my favourite, especially given my recent interest, if not success, in polyrhythms. Otherwise, I fell in love with the classical dignity of Haydn, so that was my other favourite to play (other than movt.2 which is a killer). But I couldn't help but enjoy both Beethovens. Fidelio was all bluster and drive from the top. The Triple was a pleasure, to play and to listen to, for I did get time in this one to listen. The lines that moved from cello to violin were clever things; the odd rhythmic interplays of piano and violin were perplexing; the virtuoso cello lines were stunning. I can worry about the count when I'm not playing, but Leonard is a wonderful leader, always there with clear counts and dynamics and cues. But maybe I should think of this as Llewellyn 1 for it was my first outing for my new/old bass. I am still adjusting to a different scale so intonation is a challenge and it's clearly toned, so not particularly loud but projecting well. A new instrument takes time and adjustment. I'm enjoying making my investment. 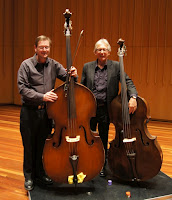