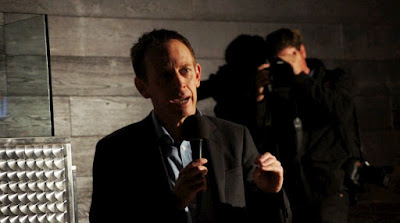 Andrew Barr seems to be running scared at the moment given all the strings he's pulling and offers he's making before the upcoming election. I don't know which way it will go - Libs, Labor with or without Barr - but I expect Shane Rattenbury will be fairly comfy in his inner-city electorate. But even so, this was the first time he'd spoken at Politics in the Pub. I wondered, given he stood to speak, if he's ever attended before, because I've never seen a speaker standing in tens of PitPs. None-the-less, I found his position intellectually appealing. He's not a creature of the party (compare Barr's work history which is pretty much all Labor politics) but a Greenpeace campainer for 10-years after early conversion in the era of ozone holes and the Franklin River and more. He basically argued that the Greens will take positions on issues according to evidence (climate) and community despite an awareness of the politics and this places them "in front of the curve". So Greens are supporting festival pill testing and the tram and MOCCA and fewer pokies and banning political donations and carbon-neutrality. Sometimes they may come in late on an issue (MOCCA, Dickson shops) after considerable press, sometimes they may be incidentally self-serving [like everyone else, really], but they do take on politically difficult issues. I worry about implications of some decisions, like the middle-class beneficence of home solar subsidies and the development-implications (for Barr, probably the purpose) of the tram, even if a pure heart may underlie each decision. We've seen something similar with Greens and new Senate voting and the resultant outcome, even if the mechanism is clearly more democratic and an improvement. But one should stand by principles and the Greens did here, at least I think they did: I will take them on their word for this one. But overall, this is a party with an inclusive and pretty clear vision of the future, and that's good.

So questions? About his self-description as a "persistent bugger", that support from party and staff and knowing what matters was key, and knowing when to "go for broke". About how he will act when he's freed from government in the run-up to the election (Greens are now a little big party, so are "now one of the hunted"). He answered nicely a question about "who is now the enemy": "I don't think of them as enemies", then talked of consultation processes. [I thought, we need more of this]. About creative tension in the government of Greens + Labor and how it's sometimes difficult to act as a minister (eg, kangaroo cull, prison extensions). Several questions about legislation over drug use. He noted the War on Drugs was a fallacy and will never work [no question there] while also noting the ACT is already "progressive" on drugs. Planning: LDA; new government architect appointed that day [I wondered if this could be another pre-election action]; housing affordability; Commonwealth input. West Basin a "tricky development, like the Kingston Foreshore which "some love, some hate". He interestingly quoted a visiting planner who described Canberra as a "party in too many rooms". [Yes, I like that, but the question is, do we end as Amsterdam or downtown LA?]. Mr Fluffy; Safe Schools and Headspace; national vs. local issues for Canberra pollies [funny question, that]; population limit [he sensibly observed there are two causes for the planetary human impact - population and consumption - but that we only know how to control one - consumption; I thought nicely put]. A final touch on plebiscite and Nauru/Manus, although both are Commonwealth issues.

Shane Rattenbury (ACT Greens and ACT government minister) spoke at Politics in the Pub for the Australia Institute.
Posted by Eric Pozza at 12:38 pm