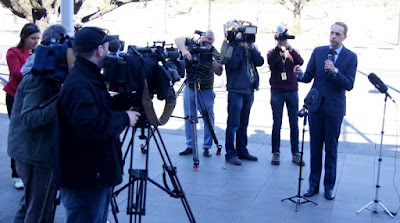 Mark it down to my boomer heritage but I like a good demo. This one had the biggest of reasons to attend: climate change and the survival of civilisation and jazz (with music and the arts more generally) certainly locates itself amongst civilisation. The event was a COAG meeting on energy policy with implications for renewables. I was amused to be invited by several organisations for a last-minute rally at the Convention Centre, not least by AYCC (Australian Youth Climate Coalition). The turn-up wasn't large. I wonder if rallies are a thing of the past, but perhaps they maintain some relevance.

At least there were journos and cameras and Megan said she saw me on SBS News (although not ABC). I joked with others about our ages, given the AYCC invitation, and got wry replies from both young and old. I caught up with a few mates, not least one retired Exec whom I admire for intelligence and openness and another who's an ardent campaigner. Simon Corbell spoke and I realised he's a hero of this group, as the architect of ACT's 100%-renewables by 2020 policy; he's about to retire. I was mightily impressed by one activist speaker and disheartened if amused by another who could obviously talk underwater and had mastered the demands of political communications (and chants): those things are probably necessary but I find them unsatisfying. It was just a small turnout but maybe it served a useful purpose and I enjoyed some banter and conversation with some aware and concerned people. And in the end, Corbell seemed to consider the outcome of a commitment by ministers to an energy policy which was "reliable, sustainable and affordable" was a good outcome. Climate is an almighty political stoush, but I expect most of our pollies accept the science and recognise the dangers and are doing something on the quiet, even if it's likely to be too little and too late. We'll know soon enough: the reckoning is coming much quicker than we had recently expected.

AYCC and 350.org held a rally outside a meeting of COAG ministers on renewable energy.
Posted by Eric Pozza at 6:44 am