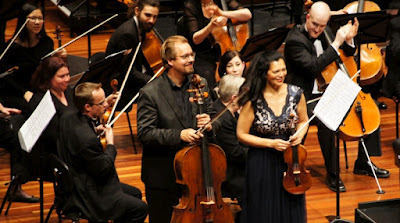 As I play more classical music I realise how little I know of it even as I'm getting better at playing it. But I'm enjoying the process of reading and bowing and revelling in the sound of an orchestra. Christian just confirmed this when he asked which encore piece the soloists at the CSO played on Thursday night. He suggested the Handel passacaglia arranged by Halvorsen for cello and violin and I'm sure it was. Christian joked it could almost be considered a fourth movement for the Brahms Double concerto that it followed because it's always played as the encore.

I'd just noticed that the melody was familiar and enjoyed the rabid scalar runs on cello and descending chromatic harmonic accompaniment. Nice. The soloists were German husband and wife team, Indira Koch (violin) and Wolfgang Emanuel Schmidt (cello), holidaying/touring in Australia/NZ and invited by Nick Milton. I luxuriated in his cello, but as a principal violinist she was no slouch with some doubly quick descending lines. Maybe it's the nature of an orchestra, being collection of many musicians attempting to work as one, but I did feel the tutti segments of the Brahms were more indistinct, at least against the clarity of two soloists, excellent as they were. But I didn't feel that for the Dvorak Symphony 7, D minor. To my ear, that felt as if the orchestra was speaking with authority and confidence. The first piece of the night seemed an odd little one, Weber Der Freischutz overture, sometimes pastoral, sometimes ecstatic, dramatic then finally balletic. But I enjoyed it all immensely, our local orchestra with such a difficult task of infrequently pulling together for such significant concerts.