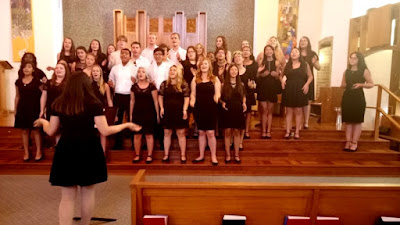 It amused me to think that my school artistic tour was to Melbourne from Adelaide to perform in Henry IV Pt.1 at another Jesuit school. For the richly named Rancho Mirage High School Singing Rattlers Reflections Show Choir and Chamber Singers, the tour was from the Coachella Valley in Southern California to Sydney and Canberra and more including lounging time at Bondi and a performance at our Parliament House. Wow! I looked up the school and it's a unique looking place: modern buildings on the edge of town with a foreboding, flat, sandy desert of saltbush just across the road. Some singers told me the temp reaches 115degF (=46degC). Hot and dry but not unknown in Australia. (To see this is to understand why California is gung-ho on climate change). But to the music. It was a difficult time for audience, being mid-summer holidays with Canberrans down the coast, but there was a decent turnout. But what voices! Youthful and strong, wonderfully harmonised. They came with contact of Woden Valley Youth Choir (locals I have yet to hear) and read one Australian work (was it in an Aboriginal language?) The music was of friendship and positivity, mostly in English but some Italian and Latin, some originally performed with dance. We got a little of that in the encore, but only a little and limited by space. There were two choirs, a show choir with dance and a chamber choir. The performance variously featured the choirs together and each choir separately. Audiamus was by all in Latin; Mad mad mad mad madrigal was from the chamber choir; Pompei featured all (a short reprise at the end had dancing); Black swan was the new Australian composition that they read on the day. There were some featured singers: Georgia Christopherson was reticent at first but then shone with a wonderful voice; some guys had small features, again with impressive voices. The teacher/leader was taken away with a student to hospital and member Vivian Walker sat in as host and conductor and did an admirable job with considerable confidence. There was a shortage of guys in the choir, but nothing unusual there. So, a very well enjoyed concert and a touch of local life in the USA. BTW, check out the school's website for some great recordings of their jazz big band.