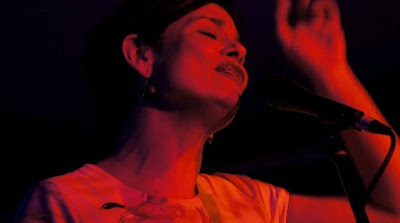 Ah, la Música Brasileira. What a great pleasure it is, for the senses and the intellect, for the whole body. Al Kerr was in town with his band Panorama Brasil and with Alda Rezende up front. Alda is Brazilian, chanteuse, trained in music and journalism, once a newsreader and still a musician.

There's a deep, earthy voice, lively with energy, touching with emotion, at least in Portuguese. She amusingly commented that lyrics are always romantic in Portuguese, sometimes cheesy in English. Not wrong. I have wondered how does the love song, that often inane lyric, work? But it does. Three sets, one for the seated, tender, songs of the locality, songs for listening, considering, but it didn't take long in the second set for the dancers to pop up - very quickly, I noticed - a pair, then another pair, then a dance floor, then rhythms infecting the bodies, then through to a final set of sambas and occasional solos and intense grooves and almost delirious joy and movement. This was a sponsored gig, by the Embassy and others, and the ambassador was there, but relaxed with the atmosphere. At the White Eagle, with its staid tables but that red velvet surrounding an enveloping black stage with lighting and band and decent sound. All inviting to the excitement of the event. I didn't catch names of tunes, they were mostly in Portuguese and many were local or lesser-known. But there was also Jobim and a series of Afro-Samba and later some of the standards of Brazilian jazz: Desafinado was one amongst several. Alda commented on the authenticity of the band. You could feel it. Al with some unique rhythms, often deadened snare, sometimes with some percussion in one hand, or joined by Asha with other small percussion when she wasn't playing flute. The flute defined many tunes, melodies or starts and ends, several unisons with piano or bass. She played two flutes, a concert flute and a longer, deeper alto (?). Bass was electric, 5-string, wonderfully solid toned, sometimes sharper, sometimes slapped, rhythmically flexible but always firmly in the pocket and setting the changes. Very nice. And Matt on piano, reading a good bit, colouring with lots of subtle and pretty jazz chords, rich with extensions and harmonies, quite a few solos and always part of a very together band. This band was very together and enjoying it. Tight and pleasurable and rhythmic - the essence of Brazil. Satisfying in so many ways; great night.