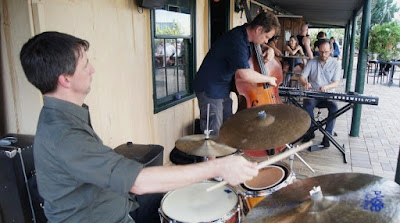 A contagion of basses sounds about right. Whoever arrives at the weekly OCI jam session is a matter of conjecture. This week it was 4 (four!) bassists, along with 2xdrums and one each of guitar, trom, vocals.

I got one tune - fair enough given some dithering over a beer. On the other hand, it was particularly interesting to hear so many bassists in one outing. The bass sound was not so big and fat this night: more edgy and toppy, sharing an amp with the piano, but fun nonetheless. I played Recordame, and others did various songs with Rachel Thorne (a great local singer) and Stella and Blue bossa and others. The imports were Sam Dobson, ex-Sydney Con playing with Geoff Bull, Cope Street Parade and others: nicely relaxed, easy-going, on top of the charts. Paddy Fitzgerald, student at Monash, nicely intoned thumb positions and good choppy solos, playing with fellow student guitarist Harry Tinney. And the locals: Alec Coulson with a nice take on Blue bossa and me, on Recordame. Moving Paths had turned up, too (including Max, bassist #5) but too early to jam; they left to play Hippo. The band this night was Ben, Hugh and Steve.