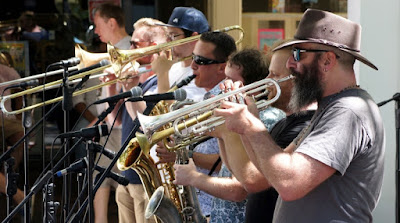 It was Australia Day and maybe we shouldn't have been at a band having a good time, on a hot day, being Indigenous aware as we are. There's politics here, just ask cantankerous, reactionary ole Barnaby J, but Cam Smith was having his last gig with Brass Knuckle Brass Band before he returned to his place of origin, Qld, and I wanted to say goodbye.

It was at Smiths, outside, hot, shaded for some, decently loud, delightfully cosmopolitan, tats or business shirts, all manner, and beers, coffees and a general jovial good will. It's a pleasantly diverse collection that gathers at Smiths (thanks to Nigel and Beth for such a nice venue) and a joyous and welcoming atmosphere and the band was nothing less than chugging and noisily inviting. Good and tight; perfect for dancing; drums and percussion; charts for harmonies of horns; that lovely lumbering and enveloping sousaphone bass and all so nicely played. Some march tunes with New Orleans references, some two feels and pop tunes arranged for the band. I recognised the pop as Careless whisper (with help), Sweet dreams, Sexual healing. That was just the first set. How much fun is this, rollicking and joyous, musically capable and an irresistible invitation to dance. Was Trump right about art being just for entertainment? He was wrong about that (there's lots he's not right about) but sometimes it can be for fun and this was and it was a great outing. I guess the BNBB will continue, but farewell Cam, thanks for so much local music and, thinking back, for your help with a few festivals. Congrats also to Xavier Kim for the piano interlude before the gig.